Veterans of the Vietnam War who attended Fordham and perished during that conflict will be honored by having their names inscribed on a new memorial being made for the University Church. 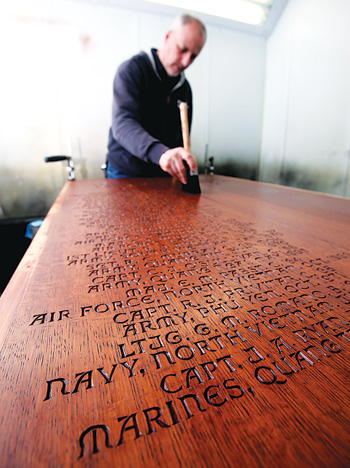 The Vietnam veterans memorial will join the current memorial in the church’s vestibule that honors the veterans of World War II.

A plaque featuring the portraits of 20 Vietnam War veterans was displayed at the Rose Hill Gym in 2004, but William Burke Sr., FCRH ’65, LAW ’68, said the initial dedication was so well attended that, through the grapevine, he learned of three more Rams who had died in the line of duty.

Burke credited Daniel J. Cremin, FCRH ’65, a retired U.S. Army colonel, with helping him locate them, as well as others who served and returned home. A list of every Fordham graduate who served in Vietnam will also be added to in the archives.

With the recent renovations in the University Church, there will be room for the Vietnam plaque in the foyer alongside the names of the rest of the Rams who made the ultimate sacrifice.

“Fordham has always honored its veterans and the people killed in action,” he said. “Our Vietnam veterans should be recognized as the others were. There’s no question they should be, and it’s just a matter of how we do it,” he said.

“[The vestibule] is where it should be, with the souls of all the others. It’s a Catholic University, and we pray for the souls.”

For Burke, the memorial, which will have room for future additions, marks the end of a long journey that he undertook to honor fellow alumni. He said he never forgot the stories that his friends told him about their experiences overseas.

“Fordham has always had a love of the military, and has been a great supporter. Sometimes you just need alumni to step up and volunteer to head something up,” he said.

“I think the guys deeply appreciate that Fordham is recognizing what they did for the country, and I think like all of us, they want to make sure those 23 soldiers are always in Fordham’s heart.”