skip to main content
Return to Fordham University
You are at:Home»Inside Fordham»Vatican Astronomer Explains “What Happened to Pluto” 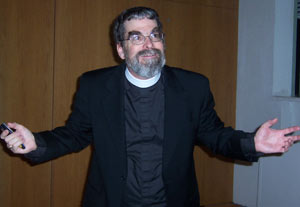 Students and faculty filled Freeman Hall on Sept. 13, to find out the answer to one of the most important questions facing astronomers today: What happened to Pluto?

When Pluto was demoted from its status as a planet in August by the International Astronomical Union (IAU), good-humored outrage swept the globe. How could Pluto, the littlest planet, no longer be what we thought it was? Brother Guy Joseph Consolmagno, S.J., this year’s Loyola Chair in Physics at Fordham, and an astronomer and curator of meteorites at the Vatican Observatory Research Group, had the answer.

Brother Consolmagno noted that defining Pluto as a planet, asteroid or dwarf planet was important because it affects how we think about Pluto and how astronomers would study the celestial body in the future.

Brother Consolmagno is the author of a number of books including Turn Left at Orion, with Dan Davis (Cambridge University Press, 1989) and Brother Astronomer (McGraw-Hill, 2001). In 2000, the small bodies nomenclature committee of the IAU named an asteroid, 4597 Consolmagno, in recognition of his work, and in 2003 he was elected president of IAU Commission 16 (Planets and Satellites).

The Vatican astronomer noted that Pluto was the only planet that had been discovered in the history of the IAU: astronomer Clyde Tombaugh found the planet in 1930 and 11-year-old Venetia Burney from Oxford, England, came up with its name that year.

Brother Consolmagno was initially chosen to be a part of the 19-member panel organized by the IAU that would decide Pluto’s fate. The effort proved to be futile.

“We can’t even agree on what city to meet in,” said Brother Consolmagno. “We bickered endlessly through e-mail, and [didn’t] come up with any consensus.” The original committee was scrapped and a new six-member committee, one that would eventually meet in secret, made the decision to change Pluto’s status.

In recent years, more and more celestial bodies have been found with masses greater or equal to that of Pluto, and it was specifically pushed from the list of planets after the 2003 discovery of the dwarf planet now known as Eris, which measures roughly 70 miles wider than Pluto. Even classifying Eris as a dwarf planet was the subject of great debate.

“We didn’t know who should name it, the planet committee or the asteroid committee,” said Brother Consolmagno. “You’d think this is arbitrary, but until we have a decision, we can’t do anything at all.”

Perhaps the most interesting aspect of the fight over Pluto’s planetary status has been the cultural impact, said Brother Consolmagno. Pluto is a favorite of young children, he said: like them, it is small and has character. He noted that the California State legislature even introduced a bill demanding that the International Astronomical Union stop its “mean spirited” attacks on the former ninth planet.

Despite the emotional argument for saving Pluto’s planetary status, Brother Consolmagno said that Pluto’s size and mass are far too small for it to remain a planet—especially now that Eris has entered the picture. “It’s a dinky little guy,” he said.