skip to main content
Return to Fordham University
You are at:Home»Inside Fordham»Vatican Astronomer: ‘Big Science’ and ‘Big Religion’ at Peace 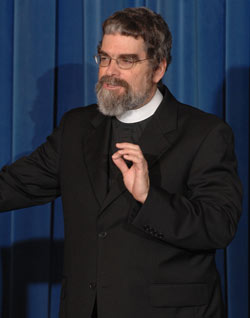 Brother Guy Consolmagno, S.J., knows a thing or two about heaven and Earth.

An astronomer by training with two degrees from the Massachusetts Institute of Technology, and a Jesuit for nearly two decades, he has merged faith and science without a second thought. For Brother Consolmagno, who delivered the annual Loyola Chair lecture at the Walsh Library on Nov. 14, the notion that religion and science are at war with each other is a false pretense.

To him, both are a search for truth.

“Like religion, science is fundamentally the work of an individual guided by a community,” said Brother Consolmagno, who is at Fordham this year as the Loyola Chair in Physics. “I spend most of my scientific working hours at my computer. I am alone. But more often than not, I am responding to observations, data, inspiration, or just daily e-mails from colleagues around world.

“When I go into a deserted church to pray, I am alone. I face God alone, but I am surrounded by an edifice that has been built up, literally and figuratively, by 2,000 years of people who have gone before me,” he said. “Even when I am alone, I am part of a community. It is as a community that we meet in our scientific meetings to hear a report about the work we’ve done, and as a community we meet to be reminded of and respond to those times when God has spoken to us. It’s big science and big religion.”

He should know: Brother Consolmagno is a Vatican astronomer who curates the Holy See’s meteorite collection, one of the largest in the world. He divides his time between Tucson, Ariz., where he observes asteroids and comets with the Vatican’s telescope on Mount Graham, and Castel Gandolfo, Italy, home of the Vatican meteorites. He even has an asteroid named in his honor by the International Astronomical Union.

He considers himself a member of the scientific class he calls “techies.” Techies, and how they practice religion, have consumed his thinking for almost two years, and he is in the process of writing a book about scientists and engineers and their religious beliefs.

Techies, he told the audience, see the world in terms of processes to be understood, jobs to be done and problems to be solved. Their orientation toward the world is pragmatic, logical and functional, and the common assumption is that most of them are atheists. “And no doubt about it, some of us are,” he said. “But, equally, a lot of us are not. There are an awful lot of scientists and engineers who also happen to be church-goers. And even the non-church attending among them are living in a culture that is saturated with religion and they are fascinated by it.”

However, there is a “serious misfit,” he said, between the typical techie and the typical church. American churches simply haven’t done much to understand techies and reach out to them in ways that would be meaningful.

Scientists and engineers don’t necessarily lack faith, he said, instead, they appear to be searching for a “comprehensive set of rules to live by,” which provides an opportunity for organized religion. Organized religion provides a template, just like the worked-out problems in a physics book, he said, against which techies can compare their spiritual experiences with those that are certified to have been experiences of the transcendent.

“In today’s world, technology is a social justice issue,” Brother Consolmagno said. “Curiosity about the world is a trait as basic and human as art, literature, or music. Denying it denies one’s humanity. The ability to understand the world in a scientific sense, furthermore, empowers the individual, it provides a habit of mind that looks for cause and effect. …

“Okay, the mechanical world view is incomplete. Show me one that isn’t. But seeing the world in terms of cause and effect is what gives us the courage to attack problems like poverty, disease and social injustice with the expectation that solutions do exist. … How can the church expect to reach them except to reach them where they live.

“Remember,” he added, “Jesus himself was a techie.”

The Loyola Chair was established in 1992 with a $1 million grant from Fordham’s Jesuit community. Its purpose is to foster research and teaching in the Jesuit tradition. As part of their appointment, scholars who hold the Loyola Chair deliver one lecture each semester during their yearlong appointment.