skip to main content
Return to Fordham University
You are at:Home»Colleges and Schools»Gabelli School of Business»Value Investing Giants Celebrated at Murray Lecture 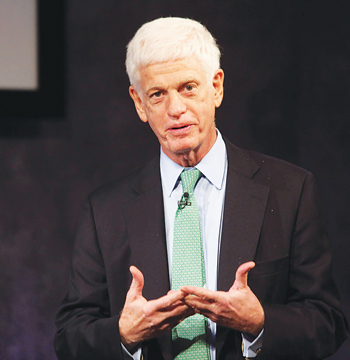 Fordham and Columbia University joined forces on April 17 to honor and celebrate value investing and the men who have advanced it through the years.

“Value Investing 20 Years Later: A Celebration of the Roger Murray Lecture Series, 1993-2013” took place, as it did two decades ago, at the Paley Center for Media in Manhattan.

The event was sponsored by GAMCO Asset Management, whose founder, Mario Gabelli, GSB ’65, earned his M.B.A. at Columbia Business School in 1967. It was there that he studied under the tutelage of Murray, a professor of finance who co-authored the fifth edition of Security Analysis, the groundbreaking 1934 book authored by value investing pioneers Benjamin Graham and David L. Dodd.
Speakers at the event talked of how Murray’s influence carries weight even today in both the private sectors of finance and in academia at Fordham and Columbia. 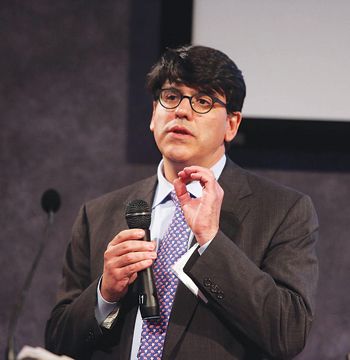 “Roger was the inspiration for reactivating a program that was started in 1934, [when]two professors at Columbia, Graham and Dodd, put together a book,” said Gabelli. “In a world of uncertainty, they were like the Rosetta Stone in unlocking values and securities when there was not that much data.

“Roger taught a whole generation of investors at Columbia between 1958 and 1986. In about 1992, the idea was, can we bring Roger and capture his lectures, and capture how he inspired investors? You don’t know where your influence will end, and Roger had an extraordinary influence on me.”

Santos mapped out the three principles of value investing, and offered statistical data to back up the underpinnings of it.

• Securities prices fluctuate, and sometimes they deviate from the fundamental value of the company.

• These securities have values you can actually assess if you have a reasonable amount of knowledge about the companies.

The third principle, he noted, has an air of mystery to it.

“As Roger Murray so beautifully put it in one of his lectures, market prices tend to gravitate towards ‘intrinsic value,’” he said.

The key to understanding value investing is patience and the courage of your convictions in the securities you have invested in—which is why more people don’t embrace it, he said. It can be a lonely road, as it’s psychologically uncomfortable, for example, to resist the temptation to jump onto the latest tech stock and instead put your money into a small utility company in Ohio.

“The right question when trading is always, ‘Why is someone selling what I’m buying?’” he said.

“This is the fundamental problem with trade. It’s a problem with a long tradition in economics. How come, when I buy from Mario, he’s selling it to me? What does he know that I don’t? That’s the key that you have ask yourself all the time when trading.”

Santos was joined by Joseph M. McShane, S.J., president of Fordham, Donna Rapaccioli, Ph.D., dean of the Gabelli School of Business and dean of the faculty of business, and James Russell Kelly, lecturer in finance and director of the Gabelli Center for Global Investment Analysis at Fordham.

Like Gabelli, Kelly took Murray’s class at Columbia, and he recalled that he was a tough grader, just like Benjamin Graham, who gave an A+ to only one student—Warren Buffett.

He predicted that the lessons of Bruce Greenwald, who has guest-lectured four times in an “Introduction to Value Investing” class, would resonate with them as strongly as Murray’s lessons did with him.

“Murray had a profound impact on my academic and professional development, and I can only strive to live up to his legacy at Fordham today,” he said.