What do the cities of Oakland, New Haven, Detroit, Hollywood and New York have in common?

Each has been subjected to critical analysis by Chris Rhomberg, Ph.D., associate professor of sociology.

Cities are more than places where people live and work, according to Rhomberg. They are where Americans come together to spark social movements that ripple across the land. 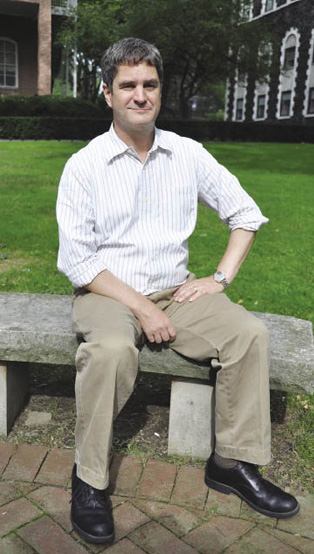 As he detailed in No There There(University of California Press, 2004), three separate movements swept across Oakland over a 60-year period.

In the 1920s, several members of the Ku Klux Klan won local elections. In 1946, a strike by 100,000 people brought the city to a standstill for almost three days. Less than 20 years later, the Black Panthers began operating in the city, signaling the birth of the Black Power movement.

“The first was an ethnic divide; the second was about labor; and the third was about race,” Rhomberg said.

It was his interest in labor movements that lead Rhomberg to study Detroit.

His forthcoming book, The Broken Table: The Detroit Newspaper Strike and the State of American Labor(Russell Sage, 2012), chronicles one of the largest and longest strikes of the 1990s.

Through archival research and more than 100 interviews, he pieced together an analysis of a labor dispute against the city’s two newspapers that lasted more than five years and involved roughly 2,500 workers from six unions.

His scholarship on the subject already has gained plaudits. His article on which the book was based, “A Signal Juncture: The Detroit Newspaper Strike and Post-Accord Labor Relations in the United States” (American Journal of Sociology, May 2010), won two awards from the American Sociological Association.

“It epitomized a collision between the older, New Deal model of industrial relations, which was epitomized by the workers in Detroit, and the new corporate anti-union model that took off in the 1980s,” he said.

“I trace how these institutional trends, or logics, collided in Detroit. It wasn’t the first strike of the ’80s or ’90s, and it certainly wasn’t the last, but it was one of the largest, and it juxtaposed these contending forces as sharply as any other.”

In some respects, the conflict was inevitable, he said. Gannett is a chain of mostly non-union newspapers, and Detroit—the birthplace of the United Auto Workers—is a stronghold of organized labor.

It’s important to note, Rhomberg said, that the strike wasn’t called to increase wages or improve working conditions, but to protest violations of labor law by the newspapers. There were disagreements about wages and benefits, but the real fight was over whether collective bargaining would even be honored.

“More than dollars and cents, there were provisions in the contract proposals that would have reduced the scope of bargaining,” he said.

In that sense, the Detroit strike presaged the turmoil that occurred last March in Wisconsin, where the governor signed a bill that stripped public union members of the right to collective bargaining.

“The balance of power has shifted such that two sides no longer come together to make a deal,” Rhomberg said. “In labor relations, one side comes to the table to make a deal, while the other side tries to get rid of the table.”

Academia is not immune to these sorts of labor disputes, as Rhomberg illustrated in “Beyond Strike Support: Labor-Community Alliances and Democratic Power in New Haven” (Labor Studies Journal, 2005). In that case, unions representing workers at Yale University built relationships with the local community that they were able to rely on when negotiations with the university turned contentious.

“So these movements of mobilization—or polarization—when a whole city is wrapped up in a conflict, crystallize certain kinds of issues,” Rhomberg said.

“These movements don’t happen all the time, but they allow us to see how issues are managed in the public sphere and how people handle them. It gives us a way also to critically assess the outcomes, and what it means for urban democracy.”

Now Rhomberg is working with Heather Gautney, Ph.D., assistant professor of sociology, to examine the film industry. As the 2007-2008 Writers Guild of America strike showed, technological changes threaten to upend the traditional production model. That model is not the factory, but a flexible system in which workers come together for a very intense period of time and then disperse once a project is done.

“But all of that may be changing,” he said. “What’s happening in the film industry could be an interesting comparison to other sectors, and it may also give a clue to the future for labor union organization.”