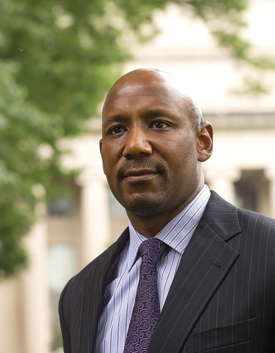 During the pre-Civil War era, much of the North and its institutions worked for the emancipation of all slaves and the end to racial segregation. In his latest book, Ebony & Ivy: Race, Slavery, and the Troubled History of America’s Universities (New York: Bloomsbury, 2013), MIT history professor Craig S. Wilder, Ph.D., FCRH ’87, does much to expose another side of history. He documents very real ties between Northern universities—the Ivy League in particular—and the perpetuation of a slave economy and racial inequality.

Wilder returns to his alma mater for a lecture on the Rose Hill campus on Thursday, Feb. 20 at 6 p.m. in the Flom Auditorium of William D. Walsh Family Library, entitled How Slavery Shaped Schools: Northern Opposition to Black Education in Pre-Civil War America. You can register for the lecture here.

His lecture will focus on African Americans’ struggle to gain access to higher education, including attempts to build colleges and to integrate existing schools.

“Cities like New York had deep economic ties to slavery in the South and the West Indies, a fact that influenced their politics and created a deep anti-abolitionist tradition,” said Wilder. “These regions saw extraordinary violence and resistance—mob attacks, assaults, and court proceedings—to stop the higher education of African Americans.”

A native of Bedford-Stuyvesant, Brooklyn, Wilder earned his undergraduate degree in history at Fordham before moving on to Columbia University to attend graduate school and earn two masters’ and a doctoral degree. He worked in the Bronx as a community organizer after graduation.

The lecture is sponsored by the Dean of the College of Fordham at Rose Hill and is open to the public. For more information or to register, visit below: www.alumni.fordham.edu/calendar.

Civil Rights in the 21st Century

Fordham Law and the Department of African and African American Studies co-sponsor a symposium featuring Kristen Clarke, Esq., bureau chief of the Civil Rights Division in the New York State Attorney General’s Office, and multimedia journalist and author Farai Chideya. On Saturday, Feb. 22 at 11 a.m. in the 12th-floor Lounge/Corrigan Center of the Lincoln Center campus, Clarke and Chideya will discuss the legacy of the 1964 Civil Rights Act, marking its 50th anniversary this year. RSVPs are recommended at aaas@fordham.edu.