Fordham recently welcomed three new members to its Board of Trustees, adding an increasingly diverse spectrum of business, community and life experience to the University’s leadership.

The new members join the 32 returning trustees in their role of directing and managing the business and affairs of the University. The trustees’ powers include electing officers of the University, concurring in the appointment of academic deans, approving the University budget, authorizing changes in construction and renovation, and promoting major University fundraising activities. 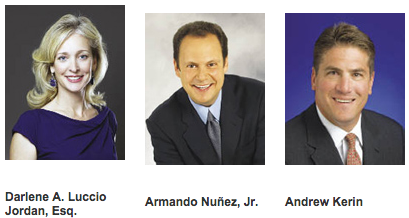 Darlene A. Luccio Jordan, Esq., FCRH ’89, executive director of The Gerald R. Jordan Foundation. Jordan heads the foundation named for her husband, founder of the investment firm Hellman, Jordan Management Co. The charity gives back to the working-class community of his upbringing, and primarily supports the arts, education, health, and youth services. She also serves on the Board of Directors of the Boys and Girls Club of Boston. In March 2012 Jordan received Fordham’s Founder’s Award.

Armando Nuñez, Jr., GSB ’82, president of CBS Paramount International Television. Nuñez oversees all international distribution, sales, and marketing for programming from CBS Television Studios, CBS Television Distribution, CBS News, Showtime, and one of the industry’s largest libraries of television products. He has held leadership positions in international distribution for the past 25 years. He has been recognized as one of the most powerful Latinos in entertainment, and was named one of the 100 Most Influential Hispanics by Hispanic Business Magazine in 2007 and 2008.

Andrew Kerin, FCRH ’85, PAR’13, chief executive officer of The Brickman Group, Ltd., the largest commercial landscape and maintenance company in the United States serving corporate, commercial and residential clients. Kerin is the former executive vice president and group president of Global Food, Hospitality and Facility Services, ARAMARK Corporation. As a member of Fordham’s President’s Council, he has served on the Gifts Committee for Excelsior | Ever Upward | The Campaign For Fordham. In 2003, he and his wife established the Kerin Endowed Scholarship to benefit students of academic merit and financial need.