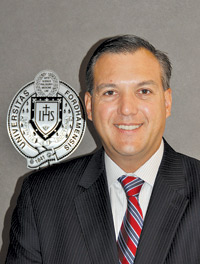 Roger A. Milici has been
instrumental in the success of
Excelsior | Ever Upward |
The Campaign for Fordham.
Photo by Joseph McLaughlin

“It is a testament to Al Checcio’s leadership and fundraising success that he has been recruited by USC,” said Joseph M. McShane, S.J., president of Fordham. “It likewise speaks to his management ability that Al has in place Roger Milici, an experienced and capable leader and fundraiser, to guide the department into the second half of the campaign.”

Milici, who has more than 17 years of experience in senior executive positions, was named associate vice president for development at Fordham in May 2009.

Before coming to Fordham, he served as senior director of development and alumni relations at the Fletcher School of Law and Diplomacy at Tufts University, a post he held since June 2001. Since his arrival at Fordham, Milici has reinvigorated fundraising and volunteer engagement for distinguished fellowships and honors programs, and reorganized school-based fundraising.

Under Checcio’s leadership, the University raised more than $337.6 million toward its $500 million goal for Excelsior | Ever Upward | The Campaign for Fordham. The campaign was launched publicly in March 2009, and raised $59.7 million in fiscal year 2010.

“It has been an honor to serve Fordham the past five years,” Checcio said. “I will always remain a part of the Fordham community, and have total confidence in the ability of the development and University relations staff. It is the best group of professionals I have ever worked with.”