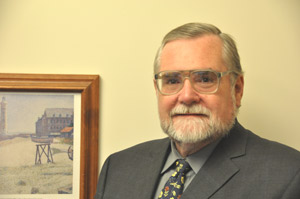 Terrence W. Tilley, Ph.D., says he hopes to continue the work of Avery Cardinal Dulles, S.J., in his own way.
Photo by Janet Sassi

Tilley, an award-winning theologian and author, will be installed at a ceremony to be announced later.

“Dr. Tilley is everything we could have hoped for in the inaugural holder of the Avery Cardinal Dulles, S.J., Chair,” said Stephen Freedman, Ph.D., senior vice president/chief academic officer at Fordham. “He is an accomplished and widely respected theologian whose scholarship is both deep and broad enough to reach ecclesiastical and academic audiences.”

The Dulles Chair will be based at Rose Hill, and be free to devote proportionally more time to research than many of the faculty in the Department of Theology. It was fully endowed with a $2 million gift from Vincent Viola, chairman of Virtu Management, LLC, a Manhattan holding company, and parent of two Fordham students.

Tilley, a graduate of the University of San Francisco and the Graduate Theological Union, Berkeley, and past president of both the College Theology Society and the Catholic Theological Society of America, has been a professor of theology at Fordham since 2006.

He is the author of nine books, the most recent of which is the award-winning The Disciples’ Jesus: Christology as Reconciling Practice (Maryknoll: Orbis Books, 2008). His other awards include the Catholic Press Association Book Award, First Place (Theology); Inventing Catholic Tradition, May 2001; the University Award for Excellence in Teaching, The Florida State University, 1990-1991; and the College Theology Society Book of the Year Award: Story Theology, 31 May 1986.

“I am humbled and honored to be named to this chair,” Tilley said. “I can imagine someone riffing on a comment of Lloyd Bentson to Dan Quayle, telling me, ‘You’re no Avery Dulles.’ I can only reply, ‘Indeed so. But, then, who is?’”

He continued, “Avery showed us how a scholar can think critically and constructively with and for the church. I hope to continue that work in my own way.”

Avery Cardinal Dulles, S.J., became the Laurence J. McGinley Professor of Religion and Society at Fordham University in 1988. He was an internationally renowned author and lecturer on theological topics, and the first American to be named a cardinal who was not a bishop. He died at the age of 90 on December 12, 2008. Cardinal Dulles, who began his connection with Fordham in 1951 while still a Jesuit in training, referred to his years in the McGinley Chair as the happiest and most satisfying of his life.

In endowing the chair, Viola said, “I thought the Dulles Endowed Chair was the most virtuous way to express my gratitude to Fordham for educating my two sons. Fordham teaches the bedrock principles of service, and Cardinal Dulles, in my opinion, established an objective standard of Catholic theology.”