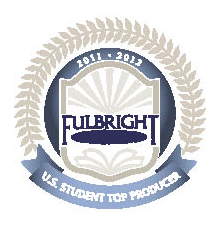 “One of the best measures of a university’s stature is the achievements of its students.”
— Joseph M. McShane, S.J.

For the third time, Fordham has been named by The Chronicle of Higher Education as one of the nation’s top producers of U.S. Fulbright students among national research universities.

Fordham joined 41 other universities recognized by The Chronicle for their excellent showing during the 2011-2012 awards cycle. The University tied with several other national research institutions in receiving nine student-Fulbright awards. These include: Duke University, New York University, Tufts University, San Diego State University and Ohio University, among others.

The University of Michigan at Ann Arbor ranked first, earning 29 awards out of 148 applicants. The Jesuit institutions of Boston College and Georgetown University also made The Chronicle list, with 21 and 15 awards, respectively.

“One of the best measures of a university’s stature is the achievements of its students,” said Joseph M. McShane, S.J., president of Fordham.

“By any standard, Fordham students are extraordinarily accomplished, and the 2011-2012 report on Fulbright scholarships is only the most recent affirmation of their ability and industry,” Father McShane said.

“This year’s recipients are an extraordinarily diverse and accomplished group, one that is poised to fulfill a mission that is central to both Fulbright and to Fordham—that of cross-cultural understanding,” she said.