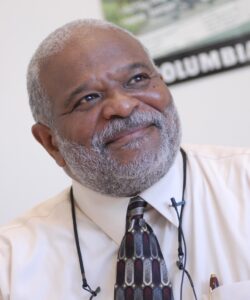 Quinton Wilkes, GSAS ‘69, ‘77, one of the founders of Fordham’s Department of African and African American Studies.

A graduate of Morgan State University who served in West Germany as a second lieutenant in the U.S. Army Military Police, Wilkes was a doctoral student in psychology at the Rose Hill campus in 1969 when he helped organize a sit-in at Cunniffe House—an action that helped spur the creation of the Institute of Afro-American Studies which eventually became the department it is today.

Mark Naison, Ph.D., professor of history, and former chair of the Department of African and African American studies, joined the institute a year later. He recalled that Wilkes set a tone in the institute that made all students in the University feel welcome in its courses.

“Quinton Wilkes had all the traits of a great therapist as well as a great teacher,” he said. “You felt comforted and validated in his presence, and he helped create an atmosphere where students and faculty were joined together in a sacred mission to bring the contributions of people of African descent into the mainstream of university teaching and university culture.”

Wilkes worked at Fordham for seven years as a teacher, department chair, and student advocate before leaving to become a therapist in 1976—the year the University granted the institute full departmental status. He earned his doctorate from Fordham a year later, becoming the first black man at the University to complete a Ph.D. in psychology.

Following his departure, he practiced for 30 years in the New Jersey Department of Mental Health, where he remained a committed civil rights activist and advocate for an empathetic approach to mental health.

Wilkes is survived by daughters Nia, Imanni, and Maia, and grandson Kevin.