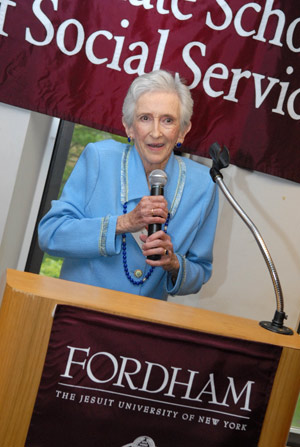 Quaranta served as dean of GSS for 25 years before taking an appointment in 2000 as provost of Marymount College. She served at Marymount until 2004, when she was named special assistant to the president for community and diocesan relations. Even when complications from illness in 2007 restricted her mobility, Quaranta continued to serve the public good.
“
Mary Ann Quaranta was in many ways the life and soul of the Graduate School of Social Services,” said Joseph M. McShane, S.J., president of Fordham. “Her scholarship and vision helped shape the school’s direction, and her tireless effort on its behalf, and on behalf of several generations of students, made the school what it is today. Her intellect, her fire, and her generous commitment to GSS and to Fordham will be sorely missed.”

“I had the good fortune of knowing Dr. Quaranta before coming to Fordham,” said Peter Vaughan, Ph.D., dean of GSS. “She was a leader in the profession of social work who cared deeply about service provision to the most vulnerable persons and groups among us, and until last month was involved in efforts to provide care and compassion to those persons.”

Among Quaranta’s achievements as dean was the school’s receipt of the National Institute of Mental Health research grant on Hispanic mental health. GSS was the eighth social work school in the country to be awarded the grant, and the only one without a university medical school.

Several of GSS’ prominent programs were initiated under Quaranta’s tenure. These include the following:

• CHILDREN F.I.R.S.T., the Children and Families Institute for Research, Support and Training;

• the Interdisciplinary Center for Family and Child Advocacy (in collaboration with Fordham Law);

• the National Center for Schools and Communities (in collaboration with the Graduate School of Education).

Quaranta also was instrumental in developing the Ravazzin Center for Social Work Research on Aging and the Institute for Managed Care and Social Work, both at Fordham.