In September of 1912, Fordham was the site of a watershed moment in the history of psychology. 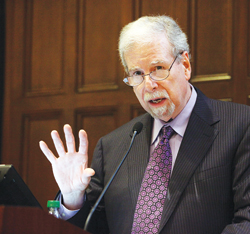 Renowned psychiatrist and psychoanalyst Carl Jung delivered a series of lectures that outlined the future of his work in psychoanalysis—including a decisive break from the theories of his friend and colleague, Sigmund Freud.

A century later, Jung remains a luminary of psychoanalysis, and his theories are applied beyond psychology to disciplines ranging from theology to ecology.

“[The lectures] mark an important event—the break between Freud and Jung,” said Mark Mattson, Ph.D., associate professor of psychology and associate dean of Fordham College at Lincoln Center. “Now we’re reexamining it and seeing how that plays out today.”

On Oct. 26 and 27, Fordham, in conjunction with the Jungian Psychoanalytic Association (JPA), marked the 100th anniversary of the 1912 lectures with a two-day conference. Bringing together dozens of Jungian scholars and clinicians on the site of the original lectures, the conference examined the importance of Jung’s time at Rose Hill and illuminated the ways Jung’s thought has influenced both modern culture and academia throughout the century.

“This is something we’ve been talking about as an important event in Fordham history for 100 years,” Mattson said.

The lectures—which were recently republished in Jung Contra Freud (Princeton University Press, 2012)—were part of a month-long international course hosted by what was then Fordham’s School of Medicine, on the latest research on nervous diseases.

It was during these lectures that Jung publicly distanced himself from some of Freud’s principal tenets of psychoanalysis, much to Freud’s dismay.

“In the early 1900s, Freud was trying to broaden the appeal of psychoanalysis beyond just Viennese physicians, and here was [Jung], who had a good reputation in other areas,” Mattson said. “Freud thought of him as an heir apparent, who could internationalize psychoanalysis.”

Their divergence in thinking led to a dramatic change in their relationship. Margaret Klenck, president of the JPA, opened the conference by reading a letter that Jung sent to Freud following the Fordham lectures, explaining his new claims and imploring Freud to not view them as a personal slight.

Leading up to the nine Fordham lectures, Jung had struggled to reconcile himself to Freud’s belief that repressed sexual urges cause neurotic behavior. He instead thought the connection between the two was metaphorical rather than literal. Ultimately, he decided he could no longer endorse Freud’s views in this matter. Jung explains in the letter that his own version of sexuality and neurosis won over participants, many of whom had found Freud’s theories outlandish.

“‘With me, it is not a question of caprice, but a fighting for what I hold to be true,” Klenk read from Jung’s letter. “On the other hand, I hope this letter will make plain that I feel no need at all to break off personal relations with you. I do not identify you with a point of doctrine, and I’ve always tried to play fair with you and shall continue to do so,’” Jung wrote.

The October conference at Fordham covered an array of topics, including how Jung’s psychoanalytic theories developed following the 1912 lectures and how his thinking is relevant today in areas such as climate change and the Jesuit tradition of the Spiritual Exercises.

Joseph Cambray, Ph.D., president of the International Association for Analytical Psychology and faculty member in Harvard Medical School’s Department of Psychiatry, gave the opening lecture for more than 100 attendees. Cambray explained how science and German romanticism intersected in the 19th and 20th centuries, and how both of these traditions informed Jung’s approach to science.

“The return of subjectivity, affect, and imagination to scientific discourse can naturally be seen as an affirmative return to the scientific tradition [of romanticism],” he said.