skip to main content
Return to Fordham University
You are at:Home»Inside Fordham»University Hosts Conference on Prevention of Problem Drinking 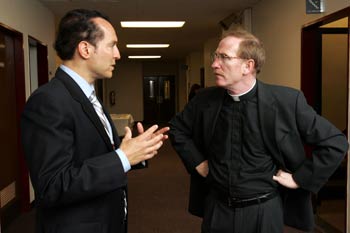 Calling the issue of high-risk drinking among college students “more acute and widespread than it has ever been,” at a conference on May 2 at the Lincoln Center campus, Joseph M. McShane, S.J., president of Fordham University, said he has seen changes in the culture at large that leave college students more vulnerable than ever to problematic behavior around alcohol.

“Students are under tremendous pressure from the culture, and they’re extending their adolescences,” Father McShane said. “But they’re receiving mixed messages: at the same time they’re being told they are adults, and can make choices for themselves.”

The conference, “Using Campus Evidence-Based Environmental Strategies and the NYC Council Nightlife Safety Report to Combat High-Risk Drinking,” was hosted with the National Institute of Alcohol Abuse and Alcoholism (NIAAA), and brought together student affairs administrators, prevention professionals, health educators, and health and counseling services staffs from colleges and universities in and around New York City. The conference was sponsored by Fordham’s Alcohol and Other Drug Education Program.

Peter Vallone Jr. (FCRH ’83, LAW ’86), New York City Council member from Queens, said that, bad as high-risk drinking is, the use of fake or borrowed IDs among underage drinkers was leading to potentially serious consequences, because police agencies are more frequently arresting bearers of fake documents, rather than merely confiscating them.

Vallone said he was “anxiously awaiting the recommendations coming from this conference,” and that he hoped its findings might be introduced to the New York City Council.

The conference focused on how to develop, fund and evaluate evidence-based programs to reduce high-risk drinking, and how schools in the New York City area can work together to realize the recommendations put forth by the New York City Council’s “Night Life Safety Report,” which describes strategies to curb underage and excessive drinking.