His Beatitude Major Archbishop Sviatoslav Shevchuk is cheered at the University Church.
Photo by Bruce Gilbert

Fordham conferred an honorary degree upon the new head and father of the Ukrainian Catholic Church and honored his predecessor on Nov. 20 at the Rose Hill campus.

His Beatitude Major Archbishop Sviatoslav Shevchuk, the new 41-year-old patriarch of the Ukrainian Catholic Church, received a doctorate of humane letters,honoris causa, at a ceremony in the University Church. More than 800 members of the Fordham, Catholic and Ukrainian communities filled the church.

In the same ceremony, Archbishop of New York Timothy Dolan unveiled and blessed a newly installed marble mosaic coat of arms of Ukraine’s patriarch emeritus, His Eminence Lubomyr Cardinal Husar, GSAS ’66, major archbishop of Kyiv-Halych. Due to ill health, the cardinal was unable to attend.

Cardinal Husar and Prelate Shevchuk have played key roles in the reemergence of the Ukrainian Catholic Church in an independent Ukraine; for 65 years under communist rule, the church had been officially disbanded due to government pressure.

Cardinal Husar, who shepherded the rebuilding of the church after the nation gained its independence in 1991, served as prelate for more than a decade. He stepped down earlier this year and was replaced by Prelate Shevchuk.

“As we honor these two remarkable archbishops, we celebrate the spirit of the Ukrainian Catholic Church, both in Ukraine and in the diaspora,” said Joseph M. McShane, S.J., president of Fordham.

Prelate Shevchuk, in accepting the honorary degree, made light of his age: He is one of the youngest prelates in the world and has been credited with attracting young, educated and invigorated believers to his church. 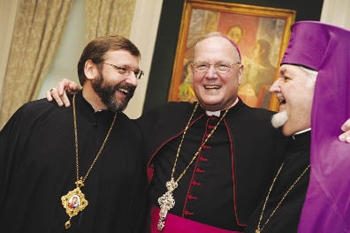 “One of my Angelicum professors in Rome used to joke that honorary doctorates are usually given to those people for whom it is too late to get an ordinary one,” said the prelate, who holds a doctorate in theology from Pontifical University of St. Thomas Aquinas and speaks several languages.

The prelate insisted that, while such an honor hardly befitted him, it did indeed befit “the martyred church that I have been called to carry on my shoulders.”

“I personally experienced this church when she was despised, scorned and humiliated,” said the prelate, who grew up under communist rule. “But despite all of this, she remained the authentic church of the Risen Christ. So it is this church, to her Christian wisdom and her intellectual life, that these honors befit.”

Also speaking were the Rev. Mark Arey from the Greek Orthodox Church in America and Archbishop Antony, eparchial bishop from the Ukrainian Orthodox Church in the United States—a church that has been historically at odds with Catholics in the Ukraine. The speakers recognized Fordham as a place where different branches of Christianity can come together in dialogue around their common heritage.

“[Prelate Shevchuk] is the shepherd for the new church,” Archbishop Antony said. “I see a man who has the same dedication as Cardinal Husar and the desire to build unity between our churches.”

Participating in Sunday’s procession were Fordham students and faculty members of Ukrainian heritage. The Fordham banners were carried by Global Outreach students who are planning a trip to Ukraine this spring.

“It means a lot to have him here in New York, and especially to have him at my university,” said Fordham College at Lincoln Center senior Yuliana Kletsun. “It creates a bond and relationship with my homeland that wouldn’t have existed otherwise.”

At a post-ceremonial gathering at the McGinley Center, Stephen Freedman, Ph.D., provost of the University and professor of ecology and evolutionary biology, announced the formation of a memorandum of understanding between Fordham and Ukrainian Catholic University (UCU) in Lviv.

The universities have agreed to collaborate on faculty research, faculty and student visits, and to foster the exchange of academic publications across the arts and sciences.

With some 5.5 million members worldwide, the Ukrainian Catholic Church acts as a bridge between Eastern and Western Christianity. It is the largest sui juris Eastern church in full communion with the Holy See.

Fordham co-sponsored the event with the Ukrainian Catholic Education Foundation