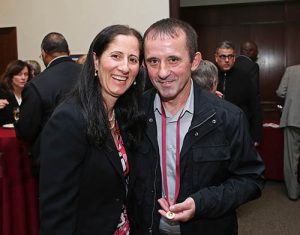 Linda Popovic beamed at her husband Paule, a Rose Hill custodian, as Joseph M. McShane, S.J., president of Fordham, ribbed him for rooting for New York’s underdog teams: the Jets, the Nets, and the Mets.

She nodded knowingly when Marco Valera, vice president for Facilities Management, said that in Paule’s 20-years at Fordham he never once called in sick or was late.

Paule was one of 14 Fordham employees recognized on Dec. 11 at the 32nd 1841 Awards ceremony, honoring contributions of workers from facilities and custodial operations and the support staff on the occasion of their 20th and 40th anniversaries.

“You make the place run,” Father McShane said to Paule and the other honorees. “You do it with grace, humor, quiet strength, and staunch devotion to your colleagues. You make us a true family.”

For Popovic, his time at Rose Hill began after his arrival from Montenegro. Linda joined him shortly thereafter, leaving the then war-torn Albania. Together the couple raised two children. Their son is now a Rose Hill campus freshman and they hope to send their daughter to Fordham in 2016.

“You can’t beat that,” said Paule.

The personal journeys of the 14 honorees, many of who came from other nations, could likely fill several books. But when asked for specifics, discretion wins the day. Custodian Jorge Yanez deflected the question.

Indeed, family was a word repeated throughout the ceremony. Several of the honorees raised their kids on campus—many of whom were at the ceremony.

“When I started here my daughter was nine months old,” said Rosa Giglio, an executive secretary in the Department of Sociology and Anthropology. “Who would’ve thought I’d last here long enough to see her become a senior here?” 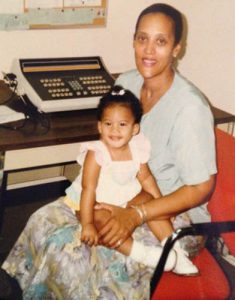 Ruth Gibson and her granddaughter Jazmin Sheppard at the Fordham switchboard in 1992.

For Ruth Gibson, the lone 40-year medalist, both her daughter and granddaughter have fond memories of playing on Eddies Parade. As a switchboard operator, Gibson has been the first point of contact for anyone calling the University for the past four decades. One could say she is, essentially, the voice of Fordham.

But besides taking adept leaps in technology, Gibson said she has also calmed parental jitters over the decades. More than once she’s left the office to comfort a student when a worried parent called the University. And more than once she’s handed out change from her purse when a student’s “meal swipe” didn’t work.

For some honorees, Fordham students become their charge—and the students return the honor. For Melba Diaz, a senior secretary for the ROTC, yesterday was an honorary Mother’s Day, as dozens of cadets turned out to recognize the woman fondly known as “The General.”

“I haven’t always been at ROTC, but for the last eight years the reward for me has been for me to see these men and women become responsible soldiers,” she said, her eyes welling up. “At their commissioning I always cry, because I feel like they’re my children.” 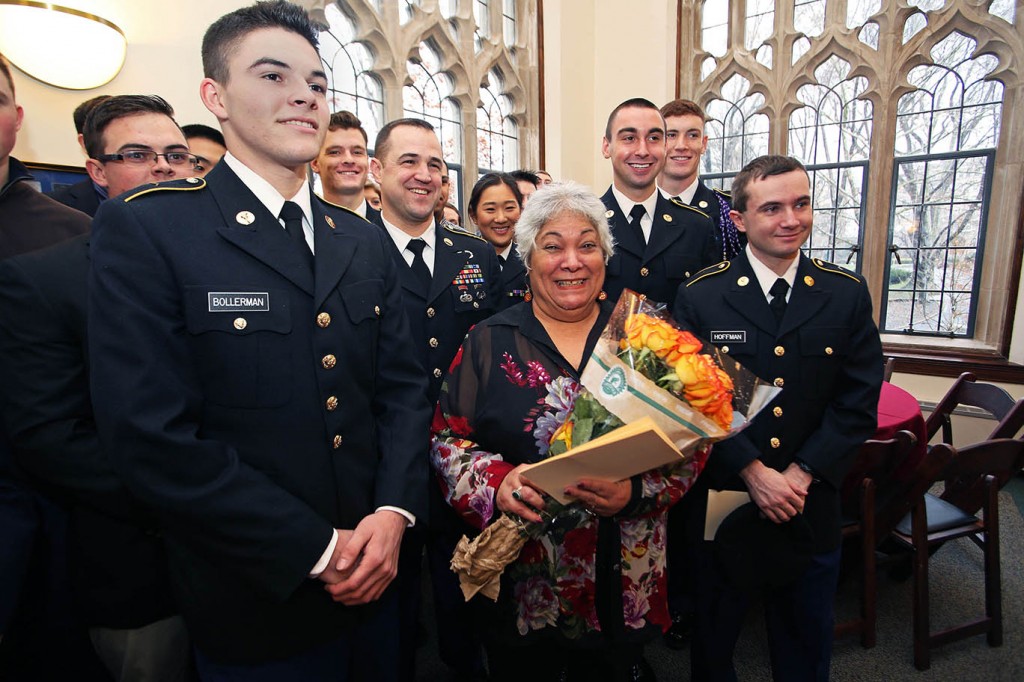 “The General.” ROTC cadets came out in force to celebrate Melba Diaz’s 20 years at Fordham.