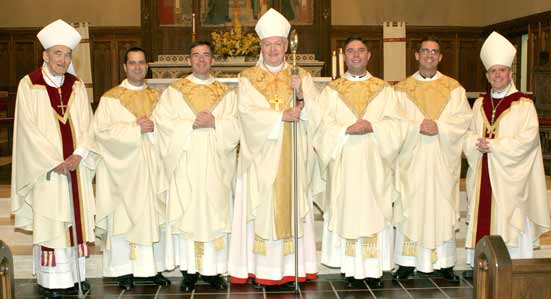 Father Duffy received a graduate degree in health care ethics from Loyola University Chicago. While in Chicago, he worked at an inner city clinic, serving the homeless and uninsured of the neighborhood. Father Duffy is a graduate of the Georgetown University School of Medicine, and a former U.S. Navy physician. He entered the Society of Jesus in 1996, in Syracuse, N.Y., and pronounced first vows of poverty, chastity and obedience in August 1998. Father Duffy is completing a master’s degree in divinity at the Jesuit School of Theology in Berkeley, Calif. He is assigned to the medical department of the Spanish Catholic Center in Washington, D.C., and serves in a local parish.

Father Frederico attended the Culinary Institute of America, earning an associate’s degree in culinary arts, and has worked as a sous-chef and a maitre d’ at several Philadelphia restaurants while attending Saint Joseph’s University. He graduated from Saint Joseph’s in 1995 with a bachelor’s degree in food marketing and entered the Society of Jesus that August. Father Frederico studied philosophy and theology at Fordham and worked at St. Rita’s Center at Theodore Roosevelt High School tutoring immigrant students in English and math. He is now completing a master’s of divinity degree at the Jesuit School of Theology at Berkeley, Calif., and will be assigned to campus ministry at Loyola College in Maryland.

Father O’Brien graduated from Georgetown University with a bachelor’s degree in government in 1988, and the University of Florida Law School in 1991. After two years in corporate litigation at a private firm, he left the law practice to explore a long-standing interest in teaching and a call to the priesthood. In 1996, he entered the Society of Jesus at the novitiate in Syracuse, N.Y. Father O’Brien earned a master’s degree in philosophy from Fordham in 2001, and taught philosophy and ethics at Saint Joseph’s University in Philadelphia. He is completing a master’s degree in divinity and a licentiate in sacred theology. Father O’Brien began serving at Holy Trinity parish in Washington, D.C., in July 2006.

Father Witt is a Queens, N.Y., native who entered the Society of Jesus in 1996 in Syracuse, N.Y. He earned a bachelor’s degree in English and theology from Fordham, a master’s degree in philosophical resources from Fordham in 2001, and a master’s degree in divinity at the Jesuit School of Theology at Berkeley, Calif. Father Witt’s summers were spent teaching English to young Jesuits of Eastern Europe in Cracow, Poland, and Studying Spanish in Cochabamba, Bolivia. Proficient in American Sign Language, he has served as deacon and spiritual director at St. Benedict Parish for the deaf in San Francisco. Father Witt will continue to serve part time in the parish, and complete a licentiate in sacred theology in Christian spirituality at the Jesuit School of Theology at Berkeley.

The University church was built in 1845 as a seminary chapel and parish church for surrounding farms and was closed in June 2003 for extensive renovations. Fordham celebrated the dedication of the renovated Church in October 2004, in a ceremony presided over by His Eminence, Edward Cardinal Egan.