skip to main content
Return to Fordham University
You are at:Home»Inside Fordham»University Begins Construction of Graduate Housing at Calder Center 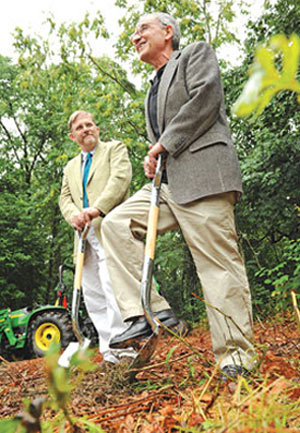 The Louis Calder Center Biological Field Station is getting a new log cabin.

The University has broken ground on a new 3,800-square-foot facility that will house 12 graduate students when completed next year. The two-story cabin will be constructed of solid Pennsylvania pine logs and feature a rustic Adirondack style designed to blend with the surrounding wooded area and the historic turn-of-the-century cabin already on site. The new cabin will occupy two of the 113 forested acres used for ecological research and environmental education.

The new housing will play a critical role in helping to increase the quality and quantity of research that can be conducted at the center, according to its director, John Wehr, Ph.D.

“One of the most important things about a biological field station is the ability to do research right on the spot,” said Wehr, a professor of biology. “If your research project, your laboratories and your living space are localized, you can do more frequent sampling and immediate research, and so the quality of your science goes up.”

An on-site residence will also help to grow Fordham’s graduate program in biology, which has been gaining in popularity over the last decade. Between 2004 and 2009, the Graduate School of Arts and Sciences (GSAS) saw a nearly 100 percent increase in applications to its doctoral program in biology at the same time that admissions selectivity dropped from more than 50 percent to 10 percent.

“We are standing on a resource that Fordham has, that no one else can duplicate in the country,” said Nancy Busch, Ph.D., dean of GSAS. “As far as I know, there is no full-time biological field station within a major metropolitan area. In choosing to make this commitment to Calder, the University is making a commitment not just to Westchester and New York City, but to a number of our international initiatives. A lot of the world’s (environmental) problems are associated with urbanization.

“This is going to put Fordham on the map in terms of the quality of students we attract and the work they are able to do,” Busch said.

The initial funding for the cabin came from a $202,697 grant from the National Science Foundation (NSF) in 2005, which planned for the construction of three log cabins housing four students each.

Eventually, plans were redrawn to incorporate the three small structures into one, thus significantly reducing the overall ecological footprint as well as the acreage needed to clear for building.

To maintain better groundwater seepage, the cabin’s parking lot will be made with a semi-impervious granular pavement, rather than asphalt. The sole asphalt area will consist of a wheelchair ramp into the structure. Also, the new facility will capture and reuse rainwater in its greenhouses.

The project includes construction of a second greenhouse adjacent to the cabin, which should help to alleviate overcrowding in the present greenhouse created by the increase in research activity. Wehr said that new greenhouse will support the center’s ongoing research on pollination, plant competition, invasive species and plant genetics. 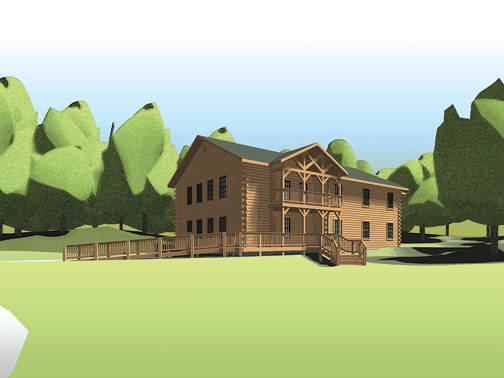 Housing at Calder has been a longstanding issue facing faculty and students doing biological research. Of the center’s 16 graduate students, only two are able to live at Calder.

Furthermore, the high cost of real estate in the surrounding region means that most students, and even some faculty, must commute up to two hours each way.

Wehr said one such student was Kyle Wright, who had to be at Calder by 5 a.m. to conduct research on songbirds and tick-borne diseases with J. Alan Clark, Ph.D., assistant professor of biology.

“We have fabulous students here at Fordham,” Wehr said. “When I look back at all the great science that has been done by our graduate students, it is even more impressive when I remember that some of them commuted two hours each way to come to work here. Now we will have an exciting and engaged community right on site.”