skip to main content
Return to Fordham University
You are at:Home»Inside Fordham»United States Must Adjust to Evolving Threat of Terrorism, Judge Says 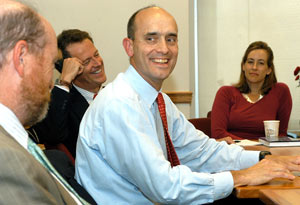 Describing terrorism as a “permanent conflict,” a national security expert told a gathering of Fordham Law School students and faculty members on Sept. 6 that the United States will have to continually adjust to the evolving nature of the terrorist threat in order to secure both the country and civil liberties.

It won’t be easy, said James E. Baker, a judge on the U.S. Court of Appeals for the Armed Forces.

“It’s one of the toughest legal issues I faced on my watch,” said Baker, who served as special assistant to former President Bill Clinton and legal advisor to the National Security Council. “Even with committed people, it’s always a struggle because of the immediate threats that come up every day, which obviously get the priority.”

Baker, who recently authored In the Common Defense: National Security Law for Perilous Times(Cambridge University Press, 2007), addressed a packed room of law students and faculty on an issue he said drives most of today’s legal debate: the constant struggle of securing the country from a terrorist attack while trying to protect the liberties of U.S. citizens. Baker’s presentation at Fordham was hosted by the Law School’s Leitner Center for International Law and Justice.

“The terrorism issue, in particular the nuclear threat, has the most potential to change everything in the law,” he said.

For Baker, terrorism will remain a prominent aspect of national security well into the foreseeable future, through succeeding administrations and generations of Americans. In his book, Baker analyzes the national security threats facing the United States and the legal response to those dangers. Whether the U.S. government is successful in addressing the terrorist threat, Baker said, depends on whether it effectively applies the law.

He told the gathering that national security law needs to be constantly scrutinized, “appraised” by decision makers, lawyers and citizens.

“Americans need to understand the process of national security law in order to evaluate U.S. policy and how it upholds the security of our country and our liberty,” Baker said. “For example, if you don’t like the Patriot Act, you don’t do away with the authority, you increase the level of oversight and appraisal.

“We need to maximize the process of appraisal.”

The law provides “essential process” to ensure that the actions of our government are both lawful and effective, Baker said.

He told the gathering that in crafting laws that affect national security, lawyers and policymakers must factor immediate threats and also consider the long-term consequences of that legislation, in particular how it will affect individual freedoms and American democracy. Abiding by the rule of law, Baker said, enhances national security rather than undermine it.

Baker said that the role of the National Security Council, which is chaired by the president and includes some of the most senior members of the cabinet from the vice president to the defense secretary, has never been more crucial.

“If you go into the field of national security law, your career will last forever,” Baker told the law students. “This is a permanent conflict. That’s why it’s important to have the right laws.”