skip to main content
Return to Fordham University
You are at:Home»Inside Fordham»UNICEF Economist Explains Effect of Recession on Global Poor 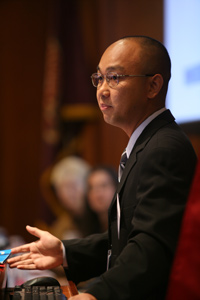 The launch of Fordham’s Consortium on Social Justice and Poverty was marked by a discussion on how the world’s poorest people have been hit the hardest by the recession.

“Children are at risk because of the economy. It’s that simple,” said Ronald U. Mendoza, Ph.D. (GSAS ’97), an economist for UNICEF’s Division of Policy and Practice. “This economic crisis will be suffered greatly by children and families that had nothing to do with the excesses that caused this downturn.”

Mendoza used statistics to outline how the unprecedented decline in the global economy is affecting the global poor. Specifically, he pointed to the spike in oil prices and the rising cost of many foods, including rice and wheat.

“Though the price of rice peaked in the middle of 2008, it’s still substantially above the 10-year average,” he said, adding that the poor are often the least equipped to weather the impact of shocks on their income.

They have few assets to sell and limited or no access to formal credit and insurance markets. They often lack the education and marketable skills that are necessary for successful migration to areas with economic opportunities.

The global economic crisis hit children in poverty as the result of a ripple effect, Mendoza said.

“Remittances have also declined,” he added. “Studies have shown that women adjust by working longer hours. Other times, children are pulled out of school to save money for the family or to join the workforce. Sometimes, you have less nutritious food on the table, or less food, period.”

UNICEF is fighting child hunger by enhancing nutrition security and working with 15 countries where life is getting worse for marginalized populations.

Panelist Sophie Mitra, Ph.D., assistant professor of economics at Fordham, discussed how the downturn is affecting not only children and families, but teenagers, women and the disabled, as well as informal and migrant workers.

“The impact of this crisis is heterogeneous in that it is not restricted to the poorest. Some in the middle class are also falling below the poverty line,” she said.

According to recent figures from the United Nations, the number of people classified among the “extreme poor” has reached an astonishing level over the past year. In Africa, there are 11.9 million more extreme poor than there were in 2008. In eastern and Southeast Asia, there are 56 million additional extreme poor. In Latin America and the Caribbean, there are 3.6 million more.

She said using gross domestic product (GDP) to measure national wealth is a faulty system, considering that the costs related to a chemical spill at a Superfund site in New Mexico, for example, are considered part of the United States’ GDP.

“The time for a new way of counting wealth has arrived,” she said.