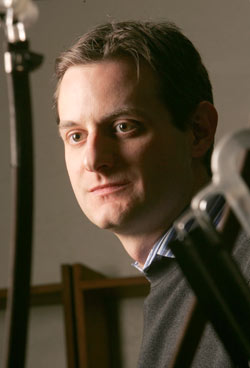 On a chill January day in 2000, a rock the size of a sedan and weighing 250 tons hurtled into the Earth’s atmosphere and began the final chapter of its existence by skidding across the Canadian sky, burning up as it descended and then smashing into a patch of Yukon wilderness.

The entry shattered the meteorite into smithereens and that, in all likelihood, would have been it, save for the fact that a few fragments somehow managed to rain down on a frozen lake. It was a lucky break for Jon Friedrich, Ph.D., assistant professor of chemistry, and for science, because as it turned out the fragments were the detritus of a meteorite unlike any ever found on Earth.

Friedrich was part of a research team that along with ones in Canada and England received samples from what is now known as the Tagish Lake meteorite. When Friedrich and his research mentor, Purdue University chemist Michael Lipschutz, Ph.D., analyzed the sample, they discovered that the fragment’s mineralogical and chemical features didn’t fit within any of the established classes of meteorites. In fact, the meteorite’s chemical composition closely matched that of the Sun’s, offering a tantalizing glimpse of a time when the Sun was a prepubescent star illuminating a solar system that was little more than a gauzy cosmic cocktail of dust and gases that drifted like a ghost against the deep, black backdrop of space.

“It was an amazing find,” said Friedrich, who joined the faculty of the Department of Chemistry in the fall, after serving as a research fellow at the American Museum of Natural History and the Max Planck Institute for Chemistry in Germany. “Essentially, it was a piece of an asteroid that the Earth had never seen. That was pretty cool.

Filling in the pieces of the puzzle of the earliest days of the solar system is what drives Friedrich’s research. He has focused on a specific class of meteorites, known as chondrites, which are among the oldest bodies in the galaxy, some of them unchanged since the day they were formed.

A lanky Midwesterner with a boyish face and short, light-brown hair, Friedrich can move easily from discussing the vastness of space with a passionate intensity to describing trace elements in the parts per quadrillion with a chemist’s sober precision. Friedrich is a cosmochemist, a field of study that took root around the middle of the last century.

The field’s raw material is the meteorite. Meteorites are to planetary scientists what fossils are to archeologists or ice cores are to climatologists. Scientists can shear away 4.5 billion years of the solar system’s history, to the time when most meteorites were forming, by peering deep into their chemical composition and gaining a sense of their so-called thermal histories, what their stellar neighborhoods were like at the time.

To do so, cosmochemists need a powerful tool—and they have one. In fact, Friedrich has been in the vanguard of the use of mass spectrometry in cosmochemistry, which can quantify the chemical composition of everything from table salt to meteorites. Friedrich uses an inductively coupled plasma mass spectrometer (ICPMS), which can generate heat equal to that of the surface of the Sun, so it’s particularly well suited for analyzing inorganic matter, like meteorites.

He is planning to set up such a spectrometer at Fordham in the spring, but he is already well underway on new research. The question he wants to answer involves how chondrites, primitive as they are, were drawn into a process involving gravitational forces, chemical reactions and heat that ultimately led to more advanced planetary bodies, like Mars, Saturn or Earth. All of them are rocks, after all, and they share many of the same elements.

“How did we go from Point A, chondrites, to Point B, terrestrial planets and large bodies that somehow were re-crystallized and heated so that the metal and silicate within them separated? So we’re trying to answer how this all happened chemically and physically,” Friedrich said.

He has assembled a team of three undergraduate research assistants and last fall traveled to the Argonne National Laboratory near Chicago to X-ray a suite of meteorites ranging from those that were unchanged since forming to ones heated by impacts and radioactive decay to 1,000 degrees Celsius, the temperature at which metal and silicate start to separate—the process that occurred as the planets were taking shape.

He intends to combine the X-ray microtomography with an ICPMS analysis of meteorites on the border between chondrites and achondrites, those meteorites that are most advanced because they have been heated enough to melt. These meteorites were not necessarily the raw material for planets like Earth, but they provide a snapshot of what the planet would have looked like chemically just before it set out on that transformative journey to become the massive celestial body it is today.

He is hopeful that the research will yield a finer-grain understanding of the processes that led, in a cosmological snap of the fingers, from rocks hovering in space to essentially the solar system we know today.

In the end, the work of planetary scientists is unified, he said, by an attempt to answer a question that humans have pondered from time immemorial: where do we come from? It is a question at once deceptively simple and imponderably complex. How could the wide arc of time and space have taken a course from gas and dust floating in the ether to Tagish Lake-like meteorites to a system of nine planets to carbon-based life forms?

For Friedrich, that is the question.

“The good thing about meteoritics is that it provides constraints,” he said. “Astronomers can use their telescopes and see gas clouds and gas discs in space and they would never know that there are chondrites in that disc in space. But a meteoriticist knows that there is a chondrite in that disc and what the solar system looks likes in that area because we have the samples. So using the two disciplines we will be able to get a clear picture of what the solar system was like when it was forming—a clearer sense of where we came from.”