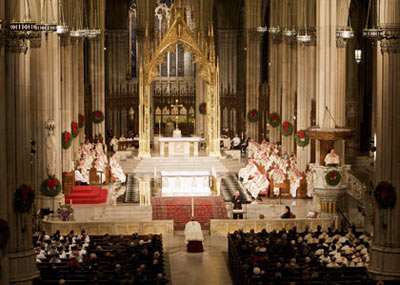 Edward Cardinal Egan, archbishop of New York, speaks to more than 750 mourners at the Mass of Christian Burial for Avery Cardinal Dulles, S.J., on Dec. 18.
Photos by Jon Roemer

The life of Avery Cardinal Dulles, S.J., America’s preeminent Catholic theologian, was celebrated on Dec. 18 in a Mass of Christian Burial held at the Cathedral of St. Patrick in New York City.

The Mass drew hundreds of mourners to the cathedral, including Cardinal Dulles’ friends and family, as well as fellow Jesuits and other members of the New York and national Catholic communities.

It was the third and final ceremony honoring Cardinal Dulles, who died Dec. 12 at the age of 90. Masses also were held on Dec. 16 and 17 at the University Church on Fordham’s Rose Hill campus.

Cardinal Dulles was the first American to become a cardinal who had not first become a bishop. The Laurence J. McGinley Professor of Religion and Society at Fordham since 1988, he was lauded by New York Archbishop Edward Cardinal Egan as a man of academic rigor and devotion.

In his homily, Cardinal Egan recalled a crucifix he saw 50 years ago in Italy that showed a tortured expression on one side of Christ’s face and a triumphant visage on the other side. He called it a potent symbol of earthly life.

Avery Cardinal Dulles, he said, shared similar characteristics; he had a privileged childhood and achieved numerous triumphs, including 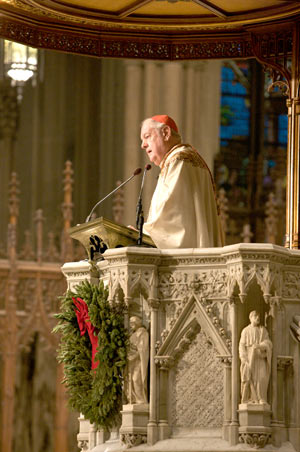 But he also knew pain. His family, which was Presbyterian, expressed disappointment at his conversion to Catholicism. Also, effects of the polio he contracted as a young man returned in later life, confining Cardinal Dulles in his final years to a wheelchair.

His body’s weakened condition prompted doctors to tell him that he would never write again, but Cardinal Dulles “proved them monumentally wrong,” Cardinal Egan said.

“In the life of our lamented cardinal, there was triumph of the most authentic sense,” he continued. “You have the example of a triumphant life story, never matched, to my knowledge, by any other American Catholic.”

Those in attendance included the children of his eldest brother, John W. F. Dulles, and sister-in-law, Eleanor Dulles: Edith Dulles Lawlis and Ellen Coelho and the children of his sister, Lillias Hinshaw: Janet Hinshaw-Thomas and Foster Hinshaw. Likewise, the Mass was celebrated with longtime friends, including John Murphy, who gave the first reading, and his longtime assistant, Anne-Marie Kirmse, O.P., who gave the second reading.

Family and friends had ample time to pay their respects to Cardinal Dulles. His body lay in state through the morning in the Lady Chapel, a small area on the cathedral’s east side behind the main sanctuary. Visitors streamed by the coffin even as the noon, 12:30 and 1 p.m. daily Masses were celebrated in the rest of the cathedral.

Only at 1:45 p.m. did regular activity cease, as the coffin was moved to the front of the sanctuary. Soon after, the elaborate, highly choreographed Mass of Christian Burial was set into motion.

Near the end, David S. Ciancimino, S.J., provincial of the New York Province of the Society of Jesus, thanked Cardinal Egan for his care of 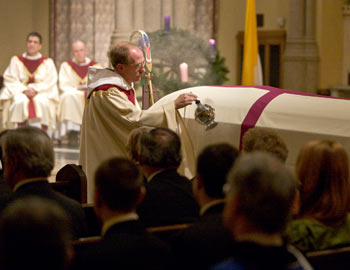 and fraternal affection to Cardinal Dulles. Both men were elevated to cardinal in the same 2001 ceremony.

“It will come as no surprise when I tell you that he cherished your friendship. He was especially touched when you traveled to Rose Hill this past August to celebrate his 90th birthday,” Father Ciancimino said.

He also called Cardinal Dulles a “priest’s priest,” and a theologian whose work was marked by a mastery of church tradition as well as creative fidelity to that tradition.

“Cardinal Dulles was all they said he was—theologian, mentor, counselor. He was, however, foremost, a man of the church,” he said. “To us Jesuits, he was also Avery, our brother—our older, wiser brother.”

Cardinal Dulles began his connection with Fordham in 1951, when he was appointed an instructor in philosophy while a Jesuit scholastic. He left Fordham in 1953 to pursue theological studies in preparation for ordination in 1956. After graduate theological studies in Europe, he undertook an academic and priestly career that spanned five decades and included professorships at Woodstock College, the Catholic University of America and several visiting posts at the world’s top universities and seminaries.

In 1988, when he reached the retirement age of 70 in his post as professor of systematic theology at the Catholic University, he returned to 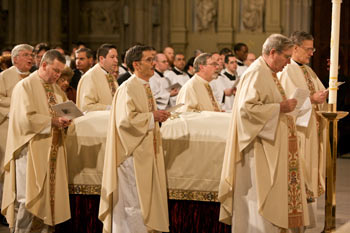 Jesuits file past the coffin of Avery Cardinal Dulles, S.J., to begin the Mass of Christian Burial.

Fordham—35 years after he had left—to accept the McGinley chair.

Cardinal Dulles referred to his years as McGinley Professor as the happiest and most satisfying of his life, pleased with the freedom that the position gave him to teach, to lecture and to assume visiting appointments all over the world.