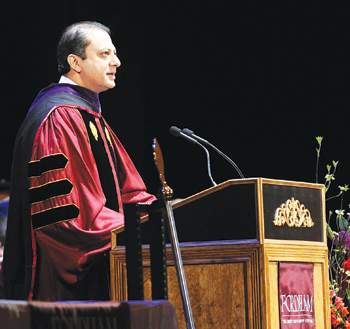 Bharara, appointed U.S. Attorney by President Obama and unanimously confirmed by the U.S. Senate, has served in the position since 2009. He was featured in a Time magazine cover story, “This Man is Busting Wall Street,” and was also named one of the 100 Most Influential People in the World by the publication in 2012.

“I hope you always keep liberty and justice in your hearts, and think from this day forward what you can do with the diploma you have just earned,” Bharara said to the graduates. “Because what you can do is truly limitless. Because the potential power of a law degree is, I believe, unmatched in American society.”