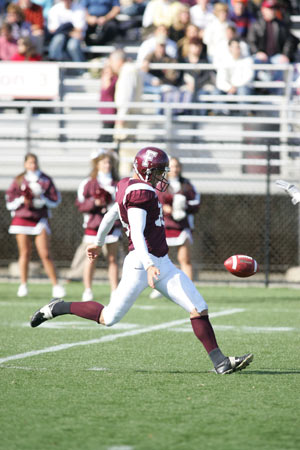 Ben Dato is one of the top returning punters in the Patriot League.
Photo by Vincent Dusovic

Last year, Dato earned third-team All-America honors from The Associated Press and honorable mention All-America accolades from the Football Gazette after finishing the season as the leading punter in the Patriot League. He punted 58 times for 2,587 yards, an average of 44.6 yards per punt, third among all NCAA FCS punters. His 44.6 average was the second best single season average in Fordham history and he ranked third in the NCAA Division I FCS last fall. His longest punt covered 66 yards in the Columbia University game. He did not have a punt blocked in 2006 while placing four inside the 20.

The 2007 football season will be a special one for the Rams as they celebrate the 125th anniversary of the first Fordham football team. Special events are planned throughout the season to commemorate the anniversary. Check www.fordhamsports.com for more information.

Dato was not the only Ram honored recently, as former catcher John Mollicone was named to the 2007 All-Gotham Baseball Team by Gotham Baseball magazine.

Mollicone, who was selected by the Tampa Bay Devil Rays at the top of the 27th round of the 2007 Major League Baseball draft, was at the heart of Fordham’s run to the Atlantic 10 Championship game for the first time since 1998.

Mollicone had a superb senior season and was named the team’s Most Valuable Player, setting career-highs in most offensive categories. He hit .325 this season with 14 doubles, nine home runs, and 53 RBI. He became just the fourth Ram ever to have over 50 RBI in a single season.

Mollicone is currently playing with the Princeton Devil Rays of the Appalachian League. He is joined in the professional ranks by former teammates Cory Riordan, who plays for the Tri-City Dust Devils in the Northwest League after being drafted in the sixth round by the Colorado Rockies, and Javier Martinez, who is with the Arizona Mariners in the Arizona Rookie League after being drafted in the 29th round by the Seattle Mariners. 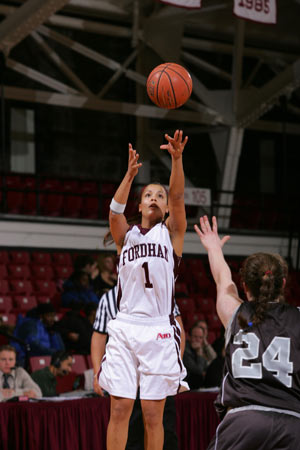 Former Fordham guard Lisa Carrol will continue her basketball career overseas, signing with U.S.D. San Raffaele Basket in Rome. The team plays in the A1 Serie League, which is the top league in Italy.

“We are very proud and excited for Lisa and the opportunity to play professional basketball in Italy,” head coach Cathy Andruzzi said. “She was an outstanding student athlete that excelled on the court and in the classroom. Lisa is motivated and determined. I have no doubts she will have a wonderful professional career and when she is done playing, will apply her business degree from Fordham into a successful career.”

On the court, Carrol was one of the premier scorers in the Atlantic 10 this past season. She ranked fifth in the league in scoring at 16.5 points per game. Carrol was the Atlantic 10 Player of the Week once this season, and was named to the PrestoSports/ MBWA Basketball Honor Roll three times.
In addition to her athletic accolades, Carrol was selected to the Atlantic 10 All-Academic team, as well as to the ESPN The Magazine Academic All-District I Second Team. Carrol, who graduated with a degree in international business, boasted the highest GPA of any basketball player at Fordham. She was one of six women’s basketball players honored at the Breakfast of Champions, a Fordham event for all athletes with a cumulative GPA over 3.0.