skip to main content
Return to Fordham University
You are at:Home»Inside Fordham»Two Thumbs Down for Zero Dark Thirty Torture at Fordham Law Panel

Waterboarding did not lead to the killing of Osama Bin laden, and anyone who believes that after watching the movie Zero Dark Thirty has been misled, a panel said on Jan. 24. 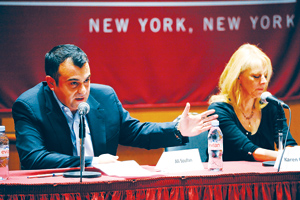 Ali Soufan and Karen Greenberg, director of the Center on National Security at Fordham School of Law
Photo by Dan Creighton

“The Zero Dark Thirty Controversy: Torture, Art, and Politics,” a discussion held in a capacity McNally Amphitheatre, was presented by the Center on National Security at Fordham School of Law.

But he chafed at the notion that it is “based on first-hand accounts of actual events,” as it states in the opening of the film. He took umbrage that a composite character in the movie named Ammar identifies Abu Ahmed al-Kuwaiti as bin Laden’s personal courier after being waterboarded, thus setting in motion the events leading to bin Laden’s discovery.

“The ‘composite character’ is actually a real person. This guy is Ammar al-Baluchi; he is currently in Guantanamo Bay.” Soufan said.

Soufan said Ammar al-Baluchi has never been waterboarded, and that Hassan Ghu, the real al-Qaeda operative who revealed al-Kuwaiti’s identity in 2005, did so without the aid of “enhanced interrogation methods.”

Thus, director Kathryn Bigelow and screenwriter Mark Boal only told half the story, he said.
“The sacrifices of people who worked in other government agencies to [help]identify Osama bin Laden, al-Kuwaiti, and the network, were totally eliminated from the story,” he said.

Jane Mayer, the author of The Dark Side: The Inside Story of How the War on Terror Turned Into a War on American Ideals (Doubleday, 2008), lamented that the larger context of the fight against terrorism had been left out of Bigelow’s movie, noting that plenty of employees in the FBI and the CIA resisted the temptation to resort to torture.

“There were many people whose conscience was stricken during this period, and [who]said ‘That’s beneath us. Not me, not now, not ever are we going to be doing that.’

“When you actually have laws and trials and a scientific approach to solving these issues rather than just … dump[ing]buckets of water on them, you get the right results.”

Alex Gibney, whose 2007 film Taxi to the Dark Side won an Academy Award for Best Documentary Feature, said he understood why the filmmakers chose to embrace the notion that when it came to avenging 9/11, no technique would be left off the table. Watching a cinema torture scene “feels tough, and it feels smart, because it feels like revenge.” said the filmmaker, even though real torture is not tough at all since the victim is bound or chained.

“There’s a value in discussing films like Zero Dark Thirty, because the power of images is strong in terms of stirring our emotions.”

Soufan hammered home the point that torture does not work. One of the best interrogations in the war on terror, he said, was when bin Laden’s personal bodyguard, right after 9/11, gave up significant information identifying the hijackers.

“I did that interrogation with my partner. Maybe you’ll be shocked, but for the most important interrogation in the war on terror, we read the Miranda rights every time.”