skip to main content
Return to Fordham University
You are at:Home»Inside Fordham»Turow at Law School Forum: Notes from Left-Handed Lawyer 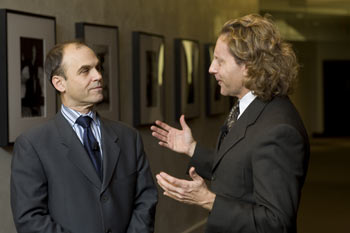 Turow, who spoke at Fordham Law School’s Forum on Law, Culture & Society on Dec. 5, still maintains a client list as a partner in Chicago’s Sonnenschein, Nath & Rosenthal firm, where he practices white-collar criminal defense and takes on pro bono cases. His legal thrillers have sold more than 25 million copies worldwide, and his breakout novel, Presumed Innocent (Farrar Straus & Giroux, 1987), was made into a movie starring Harrison Ford.

Turow told the audience that he ended up going to law school largely because of “writer’s disease,” the inability to turn off his imagination. “As a creative writer, I wanted to find something to help me get outside of myself, and that proved to be the law,” he said.

As a writer, Turow said that he sometimes felt like an “impostor” while studying law. “It wasn’t until after [I wrote] Presumed Innocent that I realized, ‘Hey, I really am a lawyer.’”

Presumed Innocent catapulted the legal thriller into the forefront of book sales, creating a new genre that paved the way for writers such as John Grisham and Steve Martini. In 1990, Time magazine labeled Turow “The Bard of the Litigious Age.” But Turow prefers to credit the Watergate scandal of the 1970s with sparking more mainstream interest in the legal field. He said that the public underwent a “baptism by fire” watching countless lawyers face indictments and jail sentences as details of the break-in and cover-up unfolded.

“The legal genre’s popularity today has to do with where we are at as a society,” he told a large audience gathered at the Time Warner Center in Manhattan. “The questions of values in our society are [also]being decided in the courts—abortion, surrogate motherhood, gay marriage.”

A former prosecutor, Turow sees the courtroom as a place where lawyers must be storytellers too, calling it a place congenial to art.

“You have 12 people to talk to and if three of them don’t understand what you are saying, generally speaking you’re in trouble,” he said. “Each of these trials that captures the nation—Bobbit, OJ, Michael Jackson—present moral dilemmas on the level of Greek tragedy.”

Turow’s most recent novel, Limitations (Picador, 2006), was published in November. The plot ofLimitations deals with an appellate judge who must decide a complicated sexual assault case in which the statute of limitations has already passed.

Thane Rosenbaum, J.D., the John Whelan Distinguished Lecturer of Law, director of the forum and moderator of the event, asked Turow to comment on whether the book was an attack, or moral critique, on the principle of the statute of limitations.

“I think it’s a moral defense, saying if a human being lives blamelessly for a period of time that the system ought to let him or her go,” Turow said. “… But I think the book leaves the question of whether truth should prevail, in all instances, quite open.”

“I still believe that the law is a noble institution,” Turow said, “… dedicated to taking a small portion of life that human beings can control—which is the way they deal with one another—and making that more just.”

William Treanor, J.D., dean of Fordham Law School, said that he has used Presumed Innocent as a model for how to be a prosecutor.

The Forum on Law, Culture and Society’s series brings high-profile personalities to explore provocative contemporary legal issues and how they influence the broader culture.