skip to main content
Return to Fordham University
You are at:Home»Inside Fordham»Tragedy Leads to a New Path in Social Work

The diagnosis was devastating. 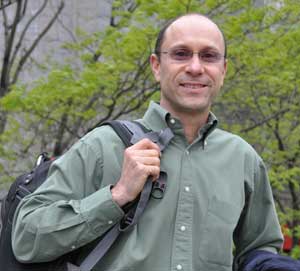 Warren Schiffer decided to enroll in GSS after losing his wife to Lou Gehrig’s Disease.
Photo by Janet Sassi

It was 2000 and Warren Schiffer’s wife, Toni Diamond, learned from medical experts that her life would be cut short by Amyotrophic Lateral Sclerosis (ALS), a paralyzing condition commonly known as Lou Gehrig’s Disease.

On that day, Schiffer and his wife made two decisions. One was that the couple would dedicate Diamond’s remaining time to raising funds to help find a cure for the disease; the other was that Schiffer would take leave from his job as a flight attendant to become her full-time caregiver.

Together, Schiffer and Diamond started Wings of Hope in 2001, an annual event to raise awareness and money for ALS research. They partnered with the Muscular Dystrophy Association (MDA) to create what has become one of the largest MDA events in history, today known as Wings Over Wall Street. To date, their annual events have raised nearly $9 million.

What Schiffer can’t quantify, however, is the effect that being his wife’s caregiver had on him.

“What happened to my wife, basically, happened to me as well—except that I didn’t have the disease,” Schiffer said.

Schiffer cared for Diamond through the stages of the rapidly progressing disease: from mobility, to mechanical ventilation, to quadriplegia; from conversing, to reading lips, to being consigned to interpreting the slightest movement of her eyelids.

Following her death in November 2004, Schiffer joined bereavement groups and struggled with grief.

“You find yourself in a very vulnerable position, especially when it is so catastrophic,” said Schiffer, who is graduating with a master’s degree in clinical social work. “I’ve had a number of difficult things happen in my life, but overall I’ve been in a position to be the one who has been supportive—as opposed to the one needing support.

“But my experience with social workers after my wife passed away gave me a more intimate view of what it feels like to need something—whether it’s to become a better caregiver or a healthier widower—and to have other people provide it.”

The desire to earn an advanced degree was nothing new to Schiffer. He already held an undergraduate degree in languages and he had grown up listening to his mother’s experiences as a caseworker for the New York Department of Social Services.

“When you have something monumental happen, like the death of a loved one, it certainly gives you an opportunity to take stock and reflect a bit,” he said. “I looked around and decided this was the right time to make some changes in my life.”

In 2007, Schiffer enrolled in the Graduate School of Social Service (GSS) to see if it was something he wanted to pursue.

“I was hooked,” he said. “I had an amazing professor who inspired me. That, along with the diversity that the social work degree offers to do so many things in so many settings, really spurred me on toward my master’s.”

This summer, Schiffer will be completing his internship at Long Beach Reach, an agency that works with adolescents referred by the New York Department of Social Services. The skills that he developed through life experience, said Schiffer, have proven to be an asset when working with troubled youths.

“Toni gave me many gifts,” he said. “One was that I have a heightened awareness of the physical and emotional challenges that people face, and I think that makes me a much better social worker.”

That, said Schiffer, along with the knowledge of human behavior, social work skills and ethics that he has learned from his GSS curriculum, makes him ready for a career in social work.

But he still maintains his commitment to Wings Over Wall Street.

“One of the things we learn in social work school is that advocacy is really important,” Schiffer said. “From just two of us sitting in a doctor’s office, making a conscious decision that we wanted to do something to help, came long-lasting effects. So I want anybody who will listen to know that if everybody does a little, it can accomplish a lot.”