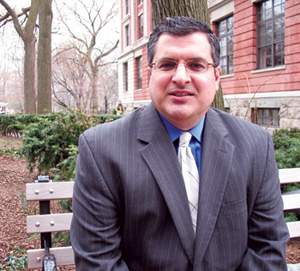 Stanley Veliotis, Ph.D. (LAW ’89), is an assistant professor of accounting and taxation in the Gabelli School of Business.
Photo by Patrick Verel

1. Taxation goes back thousands of years. In fact, “tithing” is described in the Old Testament.

2. Can you guess the author of this quote? “The hardest thing in the world to understand is the income tax.” It was Albert Einstein.

3. Sometimes the government is unable to convict criminals for their crimes. But they often are convicted on failing to pay taxes on the profits from their criminal exploits.
Al Capone is one famous example.

4. As much as Americans complain today about high tax rates, for the last few decades, income tax rates have been very low compared to past rates. For example, marginal tax rates were as high as 90 percent in the middle of the last century.

5. “Death and taxes” These are two oft-cited certainties of life.

6. “For better or for worse” If you file a joint tax return with your spouse, you can be held responsible for the errors and
omissions that your spouse makes.

7. The statute of limitations for the Internal Revenue Service to audit you is generally three years, but if mistakes are large enough it could be longer and, in some cases, forever.

8. The United States is one of only a few countries that tax their citizens on all their income even if they do not live in their home country.

9. Be careful not to pay income tax to too many jurisdictions. Usually you can receive a credit for tax paid to another  state or country.

10. It is actually NOT a good thing to receive a tax refund in April when you file your annual tax return. In essence, you have provided an interest-free loan to the government.