skip to main content
Return to Fordham University
You are at:Home»Inside Fordham»Top 10 Heresies in the History of Christianity 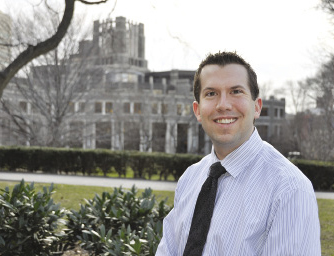 J. Patrick Hornbeck II, D.Phil., assistant professor of theology and medieval studies, chronicles the stories of people and communities who live at the margins of established religious traditions.

His first book, What Is a Lollard?(Oxford University Press, 2010), discusses the beliefs and practices of heretics and heresy defendants in late medieval England. Hornbeck is currently working with Thomas M. Beaudoin, Ph.D., to study the sociological, psychological and theological struggles that mark the processes through which people choose to disaffiliate from Roman Catholicism.

1. Arians have been called the “archetypal” Christian heretics; accusations of Arianism have been made in almost every century since the fourth. Taking its name from an Egyptian priest, Arius, this heresy holds that Jesus, while the son of God, is neither eternal nor as fully divine as God the father.

2. Free Spirit heretics were thought in the 14th and 15th centuries to believe that once people reach a state of spiritual perfection, laws no longer apply to them. While the heresy may have existed more in the minds of inquisitors than anywhere else, fear of it sparked persecutions in France, Holland and Spain.

3. Marcionites, living in the second and third centuries, believed that the vengeful, angry God they found in the Hebrew Bible was an evil tyrant, separate from—and inferior to—the loving, forgiving God of the New Testament. Like many of their contemporaries, they perceived the world as a battleground between the forces of good and evil.

4. My colleague Maureen A. Tilley, Ph.D., has written extensively about Donatists. They declared that baptism and other sacraments administered by so-called “traditores”—Christians who had willingly repudiated their faith in the face of persecution from the Roman Empire—were invalid.

5. Cathars may have formed groups in southern France and Italy in the 12th through 14th centuries. The most extreme among them believed that the physical world was the handiwork of an evil god. Avoiding meat, cheese and some other foods, as well as refraining from sexual intercourse, were ways to connect with the spiritual world.

6. Docetists proposed that the Son of God never fully took on human flesh and that the body of Jesus was an illusion, just as Zeus in Greek mythology took the form of a bull to seduce Europa. Jesus, therefore, never physically died on the cross.

7. Nestorians, another group of early Christians, believed that the human and divine persons of Jesus remained separate; thus for them “Jesus Christ” and “the Son of God” are not quite one and the same. Nestorian churches remained active in Persia and China as late as the eighth century.

8. Pelagians derived their name from Pelagius, a British monk who preached in fifth-century Rome. He allegedly declared that Christians could earn their way into Heaven by doing good deeds, without the need of divine grace.

9. Conciliarists lived at a time in the Middle Ages when two and sometimes three rivals simultaneously claimed to be pope. They believed that church councils hold ultimate authority and even have the power to depose the pope. They were formally condemned at the Fifth Lateran Council of 1512–1517; ultimately, the doctrine of papal infallibility was declared in 1870.

10. Lollards lived in 14th- through 16th-century England and may have been inspired by the teachings of John Wyclif, a controversial philosopher and theologian at the University of Oxford. Rejecting transubstantiation, the powers of the pope and many ceremonies of the church, they advocated for what some have called a “premature Reformation.”