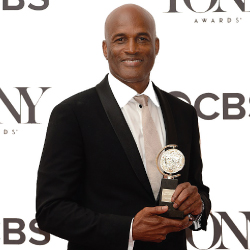 Theater director Kenny Leon, winner of a 2014 Tony Award for his direction of the revival of A Raisin in the Sun, and whose newest production,Holler if Ya Hear Me, opened last week on Broadway, has been appointed to Fordham’s Denzel Washington Endowed Chair for Theatre for 2014.

In addition to 12 years as artistic director of Atlanta’s Alliance Theatre Company, Leon was the founder of the True Colors Theater Company. He has directed opera, television, and eight Broadway plays.

His latest, Holler, which opened on June 19, is a musical about the late rap artist Tupac Shakur.

Leon praised his new chair’s benefactor, Denzel Washington, FCLC ’77, with whom he shares a special bond: Washington was the lead actor in Leon’s Tony-winning production of Raisin, and Leon had previously directed Washington on Broadway in the revival of August Wilson’sFences—for which Washington earned a best actor Tony Award. Calling Washington an “American treasure,” the director said that Washington built the foundation of his career “centered upon the world of theater.” 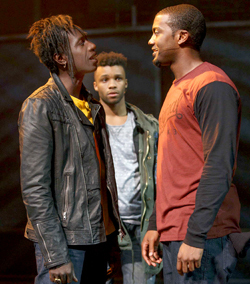 Saul Williams as Joh, Dyllon Burnside as Anthony (background), Joshua Boone as Darius, in Holler If Ya Hear Me.
Photo by Joan Marcus

“Theater allows him to expand what he does in his film work, and that’s why he wants to come back to the stage every three or four years,” said Leon. “That’s the true litmus test: Not every film actor can do theater, but most of your great theater artists can do film.”
Leon’s visiting faculty appointment will run through the fall semester.