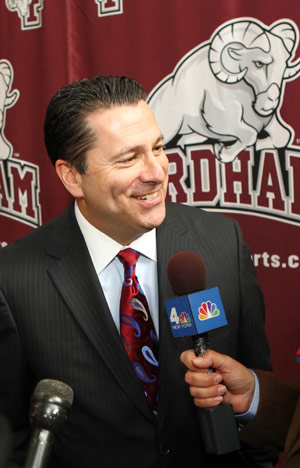 Fordham University has chosen Tom Pecora to be the head coach of its men’s basketball program. Pecora, who led Hofstra University to four 20-win seasons as a head coach, signed a multi-year contract to lead the Fordham Rams in the highly competitive Atlantic 10 Conference.

“We are pleased, of course, to be able to bring Tom Pecora to coach the Rams, not least because we believe he will give players the kind of college athletic experience they expect at Fordham,” said Joseph M. McShane, S.J., president of the University. “Our student athletes deserve the same kind of care and attention to personal development on the court as they receive in the classroom, and we are confident that Tom is the coach to deliver that experience.”

Pecora just completed his ninth season as the Hofstra head coach and his 16th season overall on the Pride bench.

“This is an exciting day for me and my family,” Pecora said. “At first, it was a difficult decision. But when I met Father McShane and learned of his vision for Fordham, it made the decision easier. I’m now ready to move the Fordham basketball program forward and elevate the program to a high level.”

In 2005-2006, Pecora led the Pride to a 26-7 record, tying the school’s wins record and advancing to the quarterfinals of the NIT. Hofstra’s two wins in the NIT marked the school’s first two postseason wins at the NCAA Division I level. In addition, the Pride placed third in the Colonial Athletic Association regular season with a 14-4 conference mark, continuing a five-year streak of improving its CAA record in every season since joining the league in 2001-02.

Pecora first joined the Pride staff in 1994-1995 as an assistant under current Villanova head coach Jay Wright. He also served as an assistant coach, along with Jay Wright, to Rollie Massimino at the University of Nevada at Las Vegas in 1992-1993.

A native of Queens Village, N.Y., Pecora is actively involved with several charities, including Father Hartman’s Christa House, the Dante Foundation, the Providence House, the Association for the Help of Retarded Children (AHRC), and CYO Charities.

Pecora and his wife, the former Mary Beth Cantwell, reside in Williston Park, N.Y., with their daughters, Amanda and Brianna, and their son, Sean.

“We believe that Tom Pecora is the right person for Fordham, a person who has a wealth of coaching experience and all-important recruiting experience in the greater metropolitan area,” said Executive Director of Intercollegiate Athletics Frank McLaughlin. “We are extremely confident that Tom will build a successful program at Fordham to become competitive in the Atlantic 10.”