skip to main content
Return to Fordham University
You are at:Home»Inside Fordham»Faculty Reads»To Math Professor, Numbers Have an Authority All Their Own 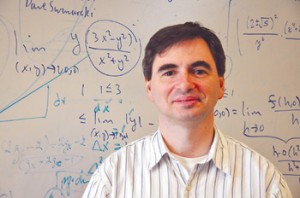 Cris Poor, Ph.D., says mathematicians provide ideas that people can use to understand the world.
Photo by Janet Sassi

Ask Cris Poor, Ph.D., to talk about math and he offers this preface:

“The German writer/philosopher Goethe once said that mathematicians are like Frenchmen; whatever they say, they transfer into their own language, and it is thenceforth something entirely different.”

It is true that staring at mathematical computations on Poor’s office white board could give someone pause.

A researcher in the theory and computation of analytic functions known as Siegel modular forms, Poor, professor of mathematics, works within the realms of complex analysis and number theory—branches of pure mathematics that are concerned with the properties and functions of complex numbers.

Recently, Poor and a research colleague helped prove the existence of five theoretical Siegel modular forms, answering a question posed by physicists in their research on string theory.

Explaining exactly how Siegel modular form research can be applied in the real world can seem a boggle, Poor said. It often takes decades, even centuries, for mathematical theorems to find concrete applications.

“I could say come back in 200 years and it would be easy for me to explain Siegel modular forms to you,” he said. “If you look historically, the real job of mathematicians is to provide ideas that people can use to understand the world.”

To support this, Poor gave an example. The Greek mathematician Apollonius of Perga (262 B.C.—circa 190 B.C.), in his book Conics, introduced the terms parabola, ellipse and hyperbola to name some shapes that are pure abstractions. In the 15th century, astronomer/mathematician Johannes Kepler applied the concepts to planetary orbits.

“That is a long lag time to discover an application,” Poor said. “But if you didn’t have the idea of ellipses, how would you look up to the heavens and see them?

“Mathematicians work out theories because they seem compelling; we don’t do it because we have definite applications in mind.”

Poor finds a certain aesthetic in the study of the Siegel modular form functions, he said, in that they contain an infinite number of “symmetries.” In mathematics, symmetry is a transformation that you can apply to an object that leaves it essentially unchanged. A symmetry can be either “discrete” or “continuous.” A sphere, for example, can be turned continuously by one mathematical operation or a series of them, and the point from which you started and stopped changes “continuously,” like flowing water.

On the other hand, (to illustrate, Poor held up an onyx crystalline octahedron, composed of eight equilateral triangles) a mathematical operation can move the eight-sided object and create a symmetry. Move that same object again, even using the same mathematical operation, and you can create a symmetry again. However, the change in the point from which you start the operation to where you finish the operation is neither smooth nor continuous, but discrete, almost as if you were hopping over stones to cross a stream, said Poor.

Siegel modular form symmetries, said Poor, are not unlike the symmetries in an octahedron or other non-spherical geometric shapes.

“Although we don’t visualize objects in higher dimensions, a Siegel modular form is like a beautiful crystal with an infinite number of different discrete symmetries,” he said.

Poor became interested in math when he was young, he said, because he liked solid reasoning and he disliked things he saw as arbitrary.

“When they made us study cups and measures in school, I refused,” he said, “because there is no reason why two cups should equal a pint, or eight pints equal a gallon. It’s a man-made measure and it is arbitrary.

“On the other hand, the speed of an object falling to earth has to be the way it is. It’s not up to people to define it; it has an authority all its own.”

“We mathematicians say that ‘true’ is best and that ‘false’ is below that,” he said. “But writing down something that doesn’t make sense is the greatest sin of all. Any operation that you create has to be clear to yourself and to others—whether it turns out to be true or false. And if you think about the mental discipline involved in that exercise, you can see it is not something that is common in every field of study. In that way, mathematics is like Kabuki theatre: there are a lot of rules you have to follow or else it’s not Kabuki.”

Poor’s recent research on Siegel modular forms, “A Lift into Siegel Modular Forms Over the Theta Group in Degree Two and the Chiral Superstring Measure,” will be published this year by the Max Planck Institute for Mathematics in Bonn, Germany. Poor’s co-author is David S. Yuen, Ph.D., professor of mathematics and computer science at Lake Forest College.