In a lecture at Fordham, an education expert disputed the notion of “our failing schools”
and said the real problem facing American schoolchildren is poverty. 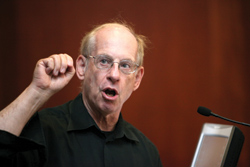 “There’s nothing wrong, seriously wrong, with our schools. There is no crisis,” said Stephen Krashen, Ph.D., professor emeritus of learning and instruction at the University of Southern California. “The crisis is 100 percent manufactured. The whole thing is a hoax.”

When poverty is taken into account, “our scores are really good” on international tests that supposedly show American schools falling far behind their counterparts in other countries, he said. He noted that some better-performing countries—like Iceland and Luxembourg—have much smaller populations and don’t have the United States’ high rate of child poverty, the highest among industrialized countries. “I think maybe 10 kids took the test in Luxembourg,” he joked.

He decried the federal government’s push for more frequent testing and said what struggling schools need is more resources for children: food, health care, and above all, access to books.

Krashen spoke on July 7 at Fordham College at Lincoln Center as part of a 10-day summer institute on multilingualism sponsored by the Graduate School of Education. The institute brought experts from around the country to address various aspects of multilingual education, in which educators seek to harness and strengthen bilingual students’ knowledge of their native languages as a way to help them learn English.

Krashen affirmed the value of a multilingual approach: “Kids in bilingual programs do better on tests of English reading than children in all-English programs,” he said. “It’s really hard getting this point across. It does work.”

He said bilingual education, as well as literacy education generally, works best when students have a chance to read for pleasure—silently, on their own, without interruptions. “Even in undisciplined, free, random reading, you build a huge amount of knowledge of the world,” while also absorbing the rules of language in a way that’s more effective than grammar drills and frequent testing, he said.

He asked: “How many of you read last night before you went to sleep, even though it was too late, and you shouldn’t have? This is addiction. The kind of reading that you and I do obsessively, all the time, is the most powerful.

“I am not saying, ‘If it feels good, it’s good for you,’” he said. “But if we’re doing it right, it should feel good. If we’re doing literacy and language development right, teachers and students should be having a pretty good time. If there’s pain, something’s really wrong.”

He cited research suggesting that access to books can counteract poverty’s effects on reading achievement. He described the paltry number of books in poor schools’ libraries and the lack of books in the homes of low-income students. The money that’s being spent on testing, and developing computerized testing, should instead be used to pay for libraries, as well as health care and in-school meals that also make a crucial difference for students, he said.

“You can have the best teaching in the world and it’s not going to do anything when kids are hungry, when they haven’t had breakfast,” he said.

He said he understands the need to evaluate students’ progress, but said there’s no evidence that the federal government’s push for more standardized tests will work. He said the National Assessment of Educational Progress already provides a good sample of students’ ability, and pointed to research showing that one famous standardized test, the SAT, failed to predict students’ success in college. A better predictor: high school grades.

“Grades—otherwise known as teacher evaluations, teacher judgments of students—is the best measure we’ve got,” he said. “It does everything these testing experts want.”