skip to main content
Return to Fordham University
You are at:Home»Inside Fordham»Tino Martinez to Speak at 169th Commencement

Constantino “Tino” Martinez, a two-time All-Star major league player and a key contributor to the New York Yankees’ four championship wins during a six-year stint with the team, will deliver the keynote address to the Class of 2014 at Fordham University’s 169th Commencement, to be held Saturday, May 17, at the Rose Hill campus. 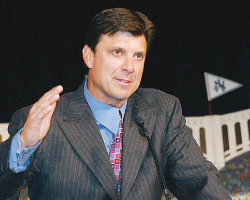 In recent years, Martinez has made his mark as a commentator on ESPN and YES Network, following a remarkable athletic career that has made him a beloved icon of the best in professional sports. Among the members of the Class of 2014 Martinez will be addressing is his daughter, Olivia, a senior at Fordham College at Rose Hill.

“Tino Martinez has advanced himself through hard work and perseverance, with humility and gratitude that are not just the hallmarks of good sportsmanship, but the foundations of a life well lived,” said Joseph M. McShane, S.J., president of Fordham. “By virtue of his Yankee career, he is already a son of the Bronx, and by virtue of his integrity, decency, and commitment to learning, it is our honor to call him now and forever a Fordham Ram.”

Martinez has shown a strong commitment to education at various points throughout his high-profile athletic career. Growing up in Tampa, Fla., he practiced relentlessly and found himself drafted by the Boston Red Sox in the third round in 1985, when he was in his late teens. He chose to attend the University of Tampa instead, where he earned high marks while also playing for the university team, the Spartans. 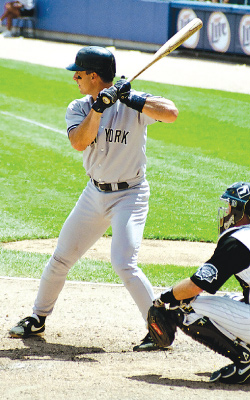 He was named Division II Player of the Year in 1988, and today that distinction has been renamed the Tino Martinez Award in his honor. That same year, he helped the U.S. baseball team win a gold medal in the Summer Olympics held in Seoul, South Korea. Last year, he was named to the National College Baseball Hall of Fame.

Martinez signed with the Seattle Mariners in 1990 and came to the Yankees in 1996, where he helped drive the team to four World Series titles over the next five years. He then went to the St. Louis Cardinals but remained prominent in the hearts of Yankee fans, who gave him a standing ovation and curtain call when he came to Yankee Stadium two years later as an opposing player.

He then played for the Tampa Bay Devil Rays and returned to the Yankees for the 2005 season before retiring with a distinguished record of 339 home runs and 1,271 runs batted in. In the years since, he has been a special adviser and spring-training assistant for the Yankees, hitting coach for the Miami Marlins, and a volunteer assistant coach at the University of South Florida, in addition to his broadcasting work.

He has spoken at high schools and baseball camps about the importance of education, and returned to the University of Tampa to complete his bachelor’s degree, which he was awarded in 2011.

Fordham will also award honorary doctorates of laws to U.S. Supreme Court Justice Sonia Sotomayor and Denny Chin, LAW ’78, a judge on the U.S. Court of Appeals for the Second Circuit. Also receiving doctorates of humane letters will be Fordham trustee Stephen E. Bepler, FCRH ’64, a longtime supporter of the University who recently retired as senior vice president with Capital Research Global Investors, where he had worked since 1972; Yvonne Cagle, M.D., a retired U.S. Air Force colonel and NASA senior astronaut physician and researcher; Sister Mary Alice Hannan, O.P., former executive director of Part of the Solution, a social service agency in the Bronx; Nemir Kirdar, GBA ’72, the founder, executive chairman and CEO of the global investment group Investcorp; and Reynold Levy, former president of Lincoln Center for the Performing Arts. in 2011.

For more about this year’s honorary degree recipients, visit www.fordham.edu.