The warnings began in December 2011, and grew louder as the spring of 2012 set in. They came from respected sources like The New York Times and National Public Radio. The messages were the same: Incidents of tick-borne Lyme disease were predicted to rise. 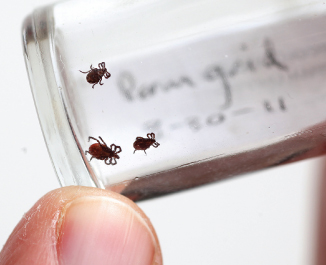 “Lyme disease may surge this year in the northeastern United States and is already spreading into Canada from a confluence of factors including acorns, mice and the climate.”

And then? Nothing happened.

“Everybody last year was predicting that we were going to have a terrible Lyme disease season, and it turned out that we absolutely did not,” said Thomas J. Daniels, Ph.D. “If you look back at our tick index for that period of time, we never got above a five. In really bad years, we can get up to a 10. We just didn’t have the ticks last year.”

Daniels, an associate research scientist and co-director of the Vector Ecology Laboratory at the Louis Calder Center Biological Field Station in Armonk, N.Y., said the working theory for the unprecedented crash in the population of the black-legged tick, Ixodes scapularis, was the unusually warm winter that year.

“Ticks normally take a break in the wintertime. They take their cue from the environment, and if it is cold enough, they shut down. They’re pretty hardy animals. They essentially sleep through the winter,” he said.

“When it’s not as cold as it normally is, there’s probably some threshold below which they become inactive, and above which they’ll stay active. With an animal that’s this small and has a limited amount of energy to survive on while it’s looking for a host, not having that time to take a nap can be harmful.” 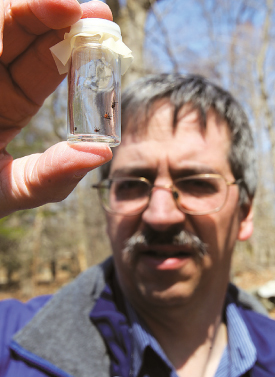 When it came time to hunt down Ixodes scapularis last summer, researchers at the center recorded the lowest numbers since sampling was first begun in 1987: less than one tick every 100 meters.

Daniels and Richard C. Falco, Ph.D., co-director of the Vector Ecology Laboratory, are writing a paper on the findings now; preliminary results were reported at Fordham College Rose Hill’s annual undergraduate research fair in April in a poster titled, “And Then There Were None: Where Are All The Ticks This Year?”, presented by Rose Hill junior Jenna Petronglo. Also contributing to the study was Graduate School of Arts and Sciences doctoral student Justin Pool.

A full analysis of the die-off will only be done after this year’s sampling is complete. Researchers don’t know, for instance, whether they witnessed a complete crash of the tick population, or if it was simply the nymphal stage, which is the one responsible for most Lyme disease cases.

So far, Daniels said it looks as if this year’s sampling will be bigger than last year. What that means is not clear, but he said that changes are afoot. Among the less encouraging changes is an increase in the number of pathogens that Ixodes scapularis can carry.

“The system that had been fairly well understood as far as when the ticks are active, what pathogens they host, what the infection rates were for those pathogens, the timing of Lyme disease season —all of that seems to be in a state of flux right now,” Daniels said.