skip to main content
Return to Fordham University
You are at:Home»Faculty Profiles»Through the Metaphor of Motherhood Comes a New Way to Breach Religious Boundaries 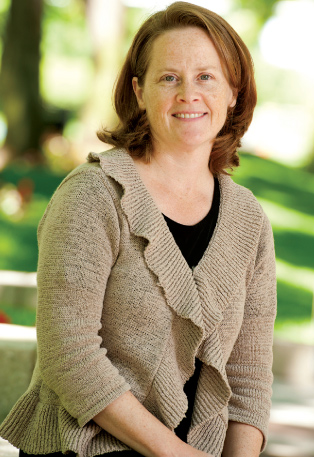 Jeannine Hill Fletcher argues in her new book Motherhood as Metaphor that theologies that take a deductive approach to religious pluralism miss what actually happens when members of different faiths come together.
Photo by Dana Maxson

The 21st-century world is shrinking.

But even as globalization becomes the reality, Christian theology still struggles to make sense of the dilemma of religious difference: If Christians believe in the truth of their tradition, does that mean that billions of believers in other faiths are wrong?

According to Jeannine Hill Fletcher, Th.D., a professor of theology who specializes in systematic and feminist theology, the reason that theology has stalled on matters of religious diversity is due in part to a reliance on deductive methodologies that begin exclusively with Christian tradition and doctrine.

“Theologians have tended to ask, ‘What does the Bible say? What has tradition said?’ and then take this body of theological principles and apply them to the situation of having a neighbor of a different faith,” said Hill Fletcher, who has published widely on religious pluralism and interreligious dialogue. “That approach has gotten us far, but not far enough.”

She argues that by zeroing in on established Christian tradition, the doctrinal method misses what actually happens when members of different faiths come together. “Our thinking about religious diversity is compromised by not having this on-the-ground sense of actual human beings,” she said. “We project things theologically that don’t match people’s lived realities.”

Moreover, because the history of Christianity consists mostly of the experiences and teachings of men, theology’s continued use of a doctrinal approach means that women’s voices are largely absent from the conversation.

In her newly released book, Motherhood as Metaphor: Engendering Interreligious Dialogue (Fordham University Press, 2013), Hill Fletcher asks what difference would it make if the conversation no longer pivoted on Christian doctrine, but rather the experiences of those working on the ground—especially women.

She discusses three examples of on-the-ground interreligious work being done by women: the missionary work of Maryknoll Sisters in China prior to World War II; the secular feminist movement; and a contemporary interfaith dialogue group that began in Philadelphia in 2001. Using archival information and interviews, she examines how the women work with people of other faiths and what we can learn from their experiences.

She found that in all three case studies, the women recognized that their work as missionaries, suffragettes, and activists brought them into contact with other women embedded in roles as mothers, daughters, caregivers, and breadwinners. As a result, they tended to tacitly appreciate that individuals are more than their religious, cultural, or national identities; each person is part of a complex network of roles and relationships, all of which contributes to who he or she is.

Such an appreciation, she said, also had profound theological implications.

“[For instance,] the Maryknoll missionaries went with a clear direction—they wanted to convert women [to Christianity]. And their early letters were all about saving these poor women and bringing them to the light,” she said. “But then you see them struggle with this cognitive dissonance, where they begin to see these other women as complex, part of this multiplicity… So the [Christian] teaching that they’ve inherited is put into conversation with a lived experience, and some of their theological thinking changes.”

Their appreciation of this complexity illustrates a key feminist theory of personhood—that the most accurate way to conceptualize ourselves is not as individuals primarily, which is the popular modern conception, but rather as relational beings, individuals embedded within networks of relationships.

As the title suggests, Hill Fletcher employs the metaphor of motherhood throughout the book to describe what a deeper appreciation of this complexity would look like.

“It’s not about biological motherhood. It’s about thinking about how that subject position of mother illuminates something about relationality and our need to care for others,” she said. “It’s a metaphor for our caring for one another and bringing one another into being beyond family and beyond community for a world that needs care.”

Theology, she said, needs to mirror the complexity of lived experience. In terms of religious identity, this would mean that whether one identifies as Christian, Jewish, Muslim, or Buddhist is less important than how these traditions have contributed to who one is.

“The doctrinal approach has categorized people as [Christians and] non-Christians, but these on-the-ground experiences approach the religious other with a much more complex notion,” she said. “We need our theologies to take seriously the fact that religion isn’t just about what I believe or what I do on certain days of the week. It’s about a complex dynamic of who I am as a human being.”

While making headway on this question of religious diversity is indeed important for Christian theology, Hill Fletcher said that it is critical for an increasingly globalized world, where people of different nationalities, cultures, and religions are no longer anonymous others, but instead are neighbors, coworkers, and friends.

“We can’t afford not to get to know our neighbors of other faiths. We can’t afford not to cooperate across religious lines,” she said. “The world that we live in—we’re in this together. So either we find those ways to get to know each other, appreciate each other, and maybe do some interesting theological thinking together, or we close in on ourselves.”