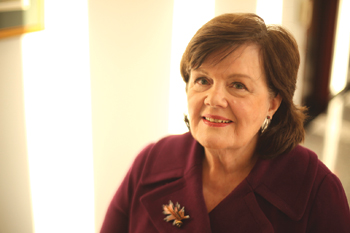 For the past few years, Anita Lightburn, Ed.D, has been studying a particularly promising type of social service program, one that helps people overcome some of the toughest personal challenges anyone can face.

Offered in a number of places around the region, this type of program—generally known as life skills empowerment—offers comprehensive help to those who are homeless and vulnerable and struggling to rebuild their lives. They include domestic violence survivors, veterans, and the formerly incarcerated. Often suffering from debilitating trauma, they can show striking progress after going through the life skills regimen, said Lightburn.

“They’ll tell us at the end, ‘Please don’t end this. I’ll do anything to come back,’” she said, describing participants’ reaction to one of the programs.

Lightburn is director of the University’s Beck Institute on Religion and Poverty in the Graduate School of Social Service, which collaborates with life skills programs in the New York area—offering training, assessing the programs’ effectiveness, and working with providers to enhance the programs.

The programs address the full spectrum of human needs, from the basic to the intangible. They help people find housing, employment, education, and services, while also offering personal connections and a sense of belonging. They’re run by grassroots coalitions including congregations, volunteers, social service agencies—in other words, a diverse community of supporters.

“If we go back in time, community centers used to respond to people’s complex needs when they were immigrating, and some of them still do,” Lightburn said. Done correctly, she said, these life skills programs offer the same kind of all-embracing support: “It’ll be providing so many layers of support so that the people won’t be getting lost in the cracks, which often happens.”

The programs typically involve three months of twice-weekly workshops on skills like budgeting, goal setting, and self-presentation, along with inspirational readings and exercises that help participants make sense of their life stories. Volunteers provide mentoring, meals, and other help.

A 2012 Beck Institute study—supported by the Fahs-Beck Fund for Research and Experimentation—found that four programs significantly improved participants’ sense of coherence and well-being, among other results. Eighty to 85 percent completed the program—“exceptional for this population,” the study says.

People served by the programs feel lost and alone, unsure where to turn. They’re often impoverished, Lightburn said, giving the example of domestic violence survivors forced to leave shelters after three months with the challenge of supporting themselves and their children.

“Begin to think about their challenges,” she said. “They’re huge.”

Some abuse survivors can be instantly immobilized when trauma resurfaces. “The past entered the present, and I went from ‘totally functional’ to ‘can’t cross the street,’ ” said one, quoted in a Beck Institute report.

Helping life skills programs recognize trauma and address it properly is one of the Beck Institute’s current projects. Others include developing effective ways to evaluate the programs and training people to be mentors.

Lightburn and her colleagues are working with diverse New York-area organizations that run life skills programs, including Catholic Charities, the Kings County District Attorney’s Office, and community groups in the city’s northern suburbs. One coalition, based in Ossining, N.Y., is seeking to help people recently released from Sing Sing prison.

The formerly incarcerated face their own kind of disorientation, Lightburn said. Often barred from going home because of probation restrictions, they find other doors closed also, despite the plans and hopes they developed during their incarceration.

“Because you have a criminal history, nobody wants you,” she said. “They’ll say, ‘I went to five places to try to get a job. I walked 30 miles. I had no money for carfare or even to ride on the subway. And as soon as I got to the [employer], they would say, ‘Oh, you have this history. I’m sorry.’ And then they would try again.

“There’s usually shame, and a lack of a sense that there’s any way to redeem their life and to move forward,” she said, referring both to those formerly incarcerated and domestic abuse survivors.

A particularly inspiring part of the programs is the storytelling exercises, in which participants tell their stories in front of their peers. They learn that they’re not alone in their struggles and see themselves in a new light. They’re also invited to tell their stories on speakers’ nights, or at graduation, before audiences that include family members, mentors, and probation officers.

“Everyone comes to listen because it’s so amazing to see, in threemonths, transformed lives,” Lightburn said. “Most of these people have never told their story to anybody. Some of them are incredibly proud that for the first time family who won’t talk to them and don’t understand what they’ve been through have come to witness and hear.”

Meanwhile, she said, volunteers who serve as mentors often call the experience “the most meaningful thing I have done with my life.”