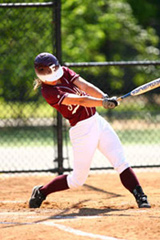 The voting took place among the district’s sports information directors. The players now will be placed on the national ballot for Academic All-American consideration.

Fisher, the team’s lone senior and captain, sports a .359 batting average with nine doubles, one triple, 14 home runs and 48 RBIs. Her home run total ties the Fordham single-season record set by Katie Davis in 2005, while her 48 RBIs are tied for third most in a season for a Ram.

Fisher leads the Atlantic 10 in home runs—ranking 45th nationally—and slugging percentage (.706). She is tied for first in the conference in runs scored (42), ranking second in RBIs and fourth in batting average.

Mineau is enjoying the finest year ever for a Fordham softball pitcher. 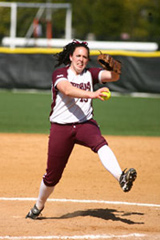 She is on pace to set Fordham’s single season ERA record with her current mark of 0.65.

Wiggins is hitting at a .348 clip (56-161) with eight doubles, three triples, 12 home runs and a team-high 58 RBIs. She leads the Atlantic 10 in RBIs—ranking 12th in the nation—while placing second in the conference in home runs and slugging percentage (.658). In addition, she is tied for second in triples and sixth in batting average.

Her 58 RBIs this year is a school record, surpassing Laura Klaiber’s 2005 mark of 56 while the 12 home runs is the third most in a season for a Ram. 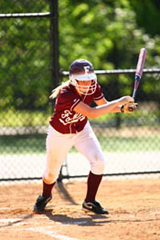