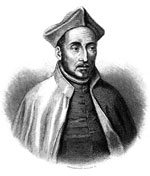 As the year 1549 drew to a close, the educational work of the new Society of Jesus was accelerating—despite the original intentions of the Society’s first 10 members. In their founding documents, St. Ignatius Loyola and his nine compatriots had ruled out becoming schoolteachers, preferring to remain rootless so they could go wherever their ministry was needed.

But they gravitated toward education—first, by establishing colleges to educate future members of the Society, and then by establishing a school for lay students in Messina, Italy, after their prowess had caught public attention. Students made rapid progress in the Jesuit schools, in part because of their so-called “Parisian method,” with its modern features such as classes of students progressing in a graduated system.

Just after the school opened in Messina, citizens of Palermo asked Ignatius to establish one there. The school formally opened in November 1549. The success of both schools prompted the Society to open many more in the next few years.