skip to main content
Return to Fordham University
You are at:Home»Inside Fordham»This Month in Fordham History»Truman Calls for Tolerance and Understanding in Atomic Age 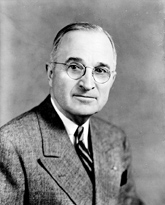 On May 11, 1946, in an address at the Rose Hill campus, President Harry S. Truman proclaimed the “new and terrible responsibilities” facing educators in the atomic age.

That age, which began nine months before when the United States dropped an atomic bomb on Hiroshima, called for mastery of what President Franklin D. Roosevelt referred to as the “science of human relationships,” he said.

“There is at least one defense against [the atomic bomb],” Truman said. “It is the defense of tolerance and of understanding, of intelligence and thoughtfulness. When we have learned these things, we shall be able to prove that Hiroshima was not the end of civilization, but the beginning of a new and better world. That is the task which confronts education.”

Truman spoke at a ceremony marking 100 years since Fordham received its state charter. Afterward, the 19 steps above Edwards Parade were rechristened the Terrace of the Presidents. The names of heads of state—including Truman—who received Fordham honorary degrees are carved into its steps.