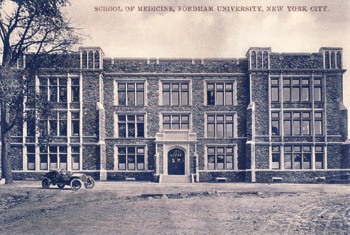 January 1913 was a significant month in the life of the Fordham School of Medicine. On Jan. 1, a new medical school building opened near the Bathgate Avenue entrance of the Rose Hill campus. (It was supposedly situated there so that cadavers could be discreetly delivered.)

The building—today, Finlay Hall—contained a clinic on the first and second floors and two lecture halls holding 200 students each. The medical school itself had opened in 1905, followed by several new schools and colleges that marked Fordham’s transformation into a university.

National standards for medical schools did not yet exist; applicants to Fordham’s school needed one year of college studies, including biology, physics and inorganic chemistry. The school enjoyed a period of success, according to the standards of the day, but ultimately failed to raise a sufficient endowment and closed in 1921.