skip to main content
Return to Fordham University
You are at:Home»Inside Fordham»This Month in Fordham History»In a Time of Change, Arrupe Revitalizes the Society 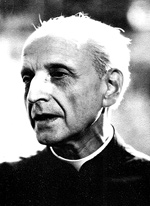 In May 1965, the Society of Jesus chose a superior general who would come to be known as the order’s second founder.

Pedro Arrupe, S.J.—a native of the Basque region of Spain, just as St. Ignatius Loyola was—took the helm of the Society at a turbulent time, when institutions everywhere were being questioned. In light of the Second Vatican Council’s call for Catholic orders to renew themselves, Arrupe convened the general congregation that articulated the Jesuits’ mission as “the service of faith, of which the promotion of justice is an absolute requirement.”

Arrupe had long been concerned with the poor and marginalized. The year before, in Valencia, Spain, he had called on Jesuit graduates to be agents of change and to reform unjust social structures. His address produced a concept that would become fundamental to Jesuit education worldwide: “men and women for others.”