skip to main content
Return to Fordham University
You are at:Home»Inside Fordham»Theology Student Blazes Path as First Recipient of Doctoral Degree in Ministry 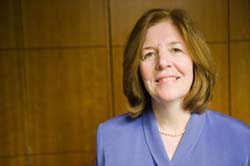 When Fordham’s Graduate School of Religion and Religious Education (GRE) established a doctoral program in March 2007 geared toward lay ecclesial ministers and other church professionals, Regina Brady Colvin was, in many ways, the perfect candidate.

Colvin, a born-and-bred Brooklynite from Bay Ridge, already had earned a master’s degree and post-master’s certificate from St. Joseph’s Seminary in Yonkers. She had spent her entire life studying in, or working within, the Catholic school system.

She is the campus minister and a member of the religion faculty at St. Peter’s Boys High School in Staten Island, and part of the pastoral implementation team at St. Patrick’s parish in Bay Ridge. Although she considered her theological background to be excellent, she wanted something more.

“I knew that this work would be very practical, that what I was doing at Fordham would not be just an academic exercise or my fulfilling another degree and getting another certificate on the wall,” she said. “But it would, in fact, benefit the church and the Diocese of Brooklyn, which is really what the [doctor of ministry degree]is about—practical theology and applying our faith, and how it applies out in the real world.”

Her route to the degree began before the degree was sanctioned officially, which is why she is the first to complete the program, the only one of its kind in the United States offered by a Jesuit university.

She had never considered enrolling at Fordham, because if she were to pursue a Ph.D. in religious education, she already would have taken the theological components. The rest of the coursework would have been methodology, which did not interest her.

But while she was studying at St. Joseph’s in 2006, the Rev. Anthony Ciorra, Ph.D., dean of GRE, visited a retreat that a friend of Colvin’s had organized. When Father Ciorra told her about the program, she embraced it.

“I was looking for a practical application, because while the seminarians who study separate from the laity at Dunwoodie go out into the field and apply the knowledge, the graduate institute, unless you’re already working in that setting, is really more abstract,” she said. “So the classroom work there is really more studying classical theology. There’s not as much opportunity for the layperson to learn practical theology.”

Practicality is a concept that permeates all of Colvin’s work, including what could be called her dissertation, which she had begun before she was accepted into the doctoral program. Her project, as she calls it, is forming ministers of Holy Communion through the Right of Christian Initiation of Adults, which is the process adult converts go through to fully join the Catholic Church.

“One enters a process of ongoing conversion, which is really the process behind all baptized Christians,” she said. “I take it from the lens of ministering Holy Communion. So there’s this understanding that they serve communion not only through the sacrament, but in their persons, in serving the larger community and by being of service to the world.”

It’s this kind of deeper theological learning that Colvin maintains is crucial to the future of the church, as there are at least 30,000 lay ecclesial ministers throughout the United States, and the number is growing.

“One of the great things about Fordham is it is trying to take the lead in the development of ministers,” she said. “Not only clergy, but laity, because right now this is the context in which the Catholic Church functions.”