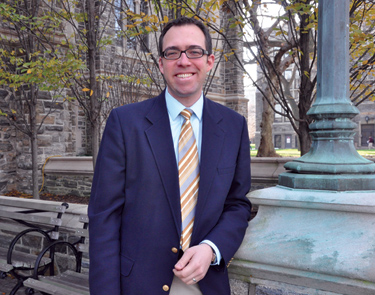 Michael Peppard, Ph.D., has developed a new reading of an early Christian image that may be the earliest reliably dated portrait of the Virgin Mary.
Photo by Patrick Verel

To understand how the Gospels were written, Michael Peppard, Ph.D., takes into account the world in which the writers lived.

Peppard, an assistant professor of theology at Rose Hill, is particularly interested in the Gospel of Mark, which was written in the first century, and precedes the other three gospels.

In The Son of God in the Roman World: Divine Sonship in Its Social and Political Context (Oxford University Press, 2011), he analyzes the term “son of God” and the concept of divine sonship as it appears in Christian theology during the Roman Empire. Living in Rome in the first century, Christians would have had very different ideas about family relationships, imperial ideology, and emperor worship.

The term “son of God” and the phrase “begotten not made”—both of which are used to describe the divine status of Jesus—had very different connotations then. The Gospel of Mark is sometimes derided as having a “low Christology,” because Jesus doesn’t come across as particularly divine, but Peppard said that is an unfair criticism.

“Mark is part of an early Christian community that declares Jesus to be God’s son. Members of that community are unique in the Greco-Roman world in that their god doesn’t have sex. Their god doesn’t partner like Zeus, who’s sleeping around, or any other pair of gods from the Near East. So you proclaim someone as God’s son, and you also believe in a monotheistic god who doesn’t procreate,” he said.

“It’s not easy to narrate, so let’s give Mark some credit for the task he’s set before him. He chooses to begin with Jesus as an adult, at his baptism, and the presentation of sonship begins there.”

One area of debate that comes up when discussing the Gospel of Mark revolves around the concept of adoption, which, in those times, was primarily wealthy men choosing other wealthy or trustworthy adult men to whom they wanted to pass their land, money, household and name.

Peppard is careful to note that giving credence to references to Jesus as adopted does not mean he is embracing adoptionism, a heretical notion that Christ was only taken on as the son of God later in life. Rather, his idea is to use social reality to help understand theological discourse.

“The author of this text had no idea that 300 years later, people were going to talk about Jesus as ‘light from light’ and ‘proceeding out of the father,’” he said.

“So I try to show how in his cultural context, becoming a son of a powerful father was a very high-status thing. I’m trying to unsettle the terrain a bit, so that Mark can be read differently.”

The research that went into The Son of God in the Roman World led to Peppard’s forthcoming book, tentatively titled Imagining Christian Initiation. At the same time early Christians were referring to Jesus as the son of God, they were also beginning to refer to each other as children of God.

Key to this understanding was the rite of baptism, which was illustrated in paintings found in a house church and baptistery in Dura-Europos, a frontier town in Syria that was excavated in 1931. The house church, which had been buried by the Roman army in roughly 240 A.D., is the oldest of its kind.

“Imagining Christian Initiation will be a micro-history on how the art on the walls of this building relates to traditions that were written and preserved orally at that time, and how all of that relates to what we can construct of the ritual that was happening in this space,” Peppard said. “The way to understand what we see on these walls is to imagine what happened between them.”

The most intriguing find to come out of this site, according to Peppard, is an image of a woman at a well. Almost everyone assumes that this represents the Samaritan woman from the Gospel of John and that she symbolizes baptism, as represented by the “living water” of the well.

“It’s also thought that the Samaritan woman was sinful, and this is an experience of her repentance. That’s the standard reading, and there’s coherence to it. The problem is: The artistic form doesn’t look like any other artistic portrayals of the Samaritan woman at the well from anywhere,” he said.

“But what it does look like is eastern or Syrian or Turkish portrayals of the annunciation to Mary, when she is told she is going to bear a son as a virgin.”

If Peppard’s reading is correct, it would make the image the earliest reliably dated portrait of the Virgin Mary. Peppard recently presented his findings—which will be published next year in the Journal of Early Christian Studies—at a conference at Oxford University.

“The people in that room were the ones who could tell me I’m wrong, and none of them did,” he said.

“So it’s been vetted at the highest levels, and it makes me a little bit uncomfortable, because it’s such an audacious thing to say to the guild of art historians that they’ve all been wrong about this image.”