skip to main content
Return to Fordham University
You are at:Home»Faculty Profiles»Theology Professor Examines the Meanings of Water in a Global Economy 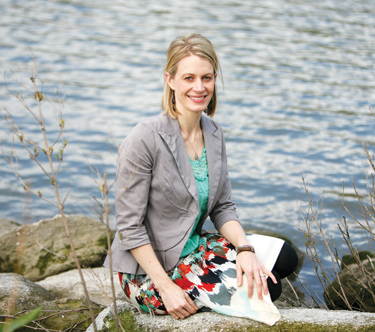 Christiana Peppard, Ph.D., is researching the meaning of water in a globally-driven economy whose demand could make it the “new oil.”
Photo by Tom Stoelker

How do we think about water? How do we value water? And what do these questions mean in an era of economic globalization?

These are the motivating inquiries guiding the research of Christiana Peppard, Ph.D., assistant professor of theology and science.

For Peppard, the questions arise in response to current fears about water as “the new oil”—a scarce resource or commodity.

But the questions also stem from “the very basic observation that, as embodied creatures, we rely fundamentally upon certain amounts of available fresh water,” she said.

Peppard is currently at work on two books, both funded by Fordham Faculty Research Grants, which address these issues from different perspectives.

Valuing Water in an Era of Globalization tackles the subject from a political economy perspective, examining the value of fresh water in terms of global dynamics, market practice, and economic theory.

“In an era of economic globalization, the default language for speaking about the value of something is its price,” said Peppard. “When we talk about worth, as a theologian or philosopher, there’s an enormous apparatus for dealing with that question. But in contemporary parlance, value equals price. This project brings in an ethical perspective in order to broaden the conversation.”

Waters for Life: Fresh Water in Catholic Theology will focus on the question of water more specifically from a theological and ethical perspective. The book will “look at ways that fresh water—in the Catholic imagination—has deep and resonant meaning.”

“I will then ask what that might mean for our conduct in the present world,” Peppard said.

One key example is the Jordan River, which Peppard said illustrates the confluence of water’s symbolic, economic, and environmental significance.

“In the present day, the Jordan River is fairly beleaguered,” she said. “At points [it]runs only on a slow trickle of run-off, despite its storied stature in the Bible, in African American slave spirituals, and in other kinds of literature.

“Given its symbolism and significance, what do we make of the fact that the contemporary Jordan is now so pathetic in places, and that this has come about almost entirely through human intervention?” she asked.

Peppard’s research draws upon a trip she took to the Jordan River’s region in 2008, in which she explored the banks of the river, met with Jordan’s minister of water and irrigation, and discussed the river’s significance with the area’s inhabitants.

“An older generation of politicians and religious leaders remember how the river used to flow previously, but see that it is vastly different today,” she said. “They have a very deep lament about this, yet are uncertain about how to proceed, given the very real demands—in an arid region—for certain amounts of water for human consumption, agricultural use, and manufacturing.

“In a situation of aridity, or in a situation of scarcity, that’s where you go to study how water functions and what it means,” she said. “[It’s] where ethical ideals also run into the hard ground of realism and human thirst.”

Peppard’s study of water is grounded in her formulation of three philosophical concepts. The first is that water is sui generis.

“There is nothing like it,” Peppard said. “It is not substitutable and it can’t be replaced.”

The logic of supply and demand claims that, in free market conditions, increased demand will somehow lead to an increase in supply through the discovery of new resources or technological innovation, or a substitute. Peppard says, however, that none of these scenarios is very likely for water.

Peppard’s second insight is that water is sine qua non, meaning that it’s a “foundational baseline.”

“Without water, there wouldn’t be anything,” she said. “Life on earth would not have evolved without it.”

Lastly, Peppard states that these two features—that water is sui generis and sine qua non—are universals, applying everywhere on earth, yet manifested in ways that are contextual and particular.

“It’s very interesting and exciting to me when we adopt a hermeneutic of fresh water—what I call a hydrological hermeneutic—in which there are some things that can be said universally, and yet context always has to be taken into account in the very articulation of those universals. However, the particularity doesn’t necessarily disable speaking about universals.”

Peppard acknowledges that a question as complex as the future of fresh water will require an interdisciplinary approach.

“Water has so many meanings, mediates so many things, and can be assessed in so many different ways,” she said.

To be effective, however, interdisciplinarity must be done well, something Peppard admits is hard work.

“It’s a call to humility and persistence,” she said.