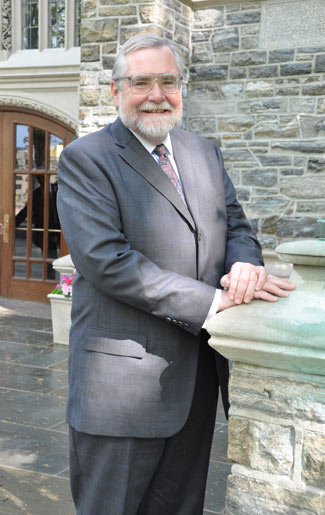 Speaking last June before the Catholic Theological Society of America, he made the case for jump-starting conversations about three topics that he believes have been suppressed, namely:

• adapting the church to current times,

• resolving differences with Jews, and

If Tilley’s goal was to inspire conversation, he succeeded. The address got people talking.

Thomas G. Weinandy, O.F.M. Cap., executive director of the Secretariat for Doctrine in the United States Conference of Catholic Bishops, responded by saying that “much of [Tilley’s] theological argumentation was superficial and fallacious.”

But Tilley, who came to Fordham in 2006 and assumed the Dulles Chair last fall, was unfazed. Although there may be pressure to accept certain debates about the faith as officially settled, he said he’s not leaving the table.

“You don’t resolve disputes by ignoring them or by imposing a solution on them. That doesn’t work,” he said. “Positions are hardened by that lack of dialogue rather than an acceptance of diverse ideas, or continued discussion to try to resolve differences.”

There is a strong resistance by some church leaders to accept changes that might bring the Catholic faith up to speed with contemporary times, Tilley said. This doesn’t mean jettisoning core values as much as it means acknowledging that theology is a communicative practice, and as such, needs to reflect how communication has changed.

Tilley said the word “nature” provides a good example of this change. It is derived from the Latin wordnatura, which was something understood by deduction from philosophy and revelation. In the 18th century, that meaning shifted. Now, nature is the object of empirical scientific investigation.

“The church teaches that artificial contraception is morally illicit because it interferes with the ‘nature’ of the act. Well, from a point of view that each act has a ‘natura’ nature, that makes perfect sense whether you accept the argument or not,” he said.

“But it makes almost no sense to people who have a different concept of what’s natural,” he continued. “So you have to communicate in ways people will understand. If you try to communicate in terms that are difficult to comprehend, it won’t work.”

The reason that the church refuses to update its linguistics is simple, according to Tilley. Words, some would say, preserve meaning.

“If I say the same word—transliterated, of course—that was used 1,000 years ago, the meaning is preserved. This is called the referential theory of meaning, or the signifying theory of language, and frankly I think it’s wrong,” Tilley said.

To get a sense of how meanings are fluid, one need only ponder the word “book.” It can be used to describe a physical object, such as the Bible; a verb, as in the act of reserving a plane flight; or another verb that means to run very quickly. The meaning of a word is determined by its use in a context.

Tilley, who refers to himself as a contextualist, cites the first chapter of Genesis, in which God created the world in six days and rested on the seventh day.

“Is that newspaper reporting? Is it science? Or is it technically a counter myth to the Babylonian creation myth, the Enuma Elish?” Tilley said.

In addition to preparing an inaugural lecture next year to celebrate the chair named for Avery Cardinal Dulles, S.J., Tilley is publishing Faith: What It Is and What It Isn’t (Orbis Books, 2010) in the fall. The book, his tenth, is a textbook that he hopes better addresses tensions between religious thought and scientific and historical inquiry.

The book begins with an exploration of what faith is not, because Tilley said that the first thing professors must do is teach young collegians to “unlearn” their beliefs.

“They tend to arrive with very strong opinions that are often wrong. They equate faith with fundamentalism, or they equate it with emotion, or they think that there isn’t anything to reason or think critically about when talking about faith,” he said.

“Many of them believe that religion is bogus or they believe that their religion is the true one, for sure, no matter what, and it’s exactly what Jesus taught. All of that needs to be taken apart before you can do something constructive.”

For his inaugural lecture, Tilley plans to cross Avery Cardinal Dulles’ best-known work, Models of the Church, with an unpublished lecture that Cardinal Dulles delivered to a group of Jesuit scholastics in the early 1990s that focused on St. Ignatius Loyola’s rules for thinking with the church.

Even before he met Cardinal Dulles, Tilley said the preeminent theologian taught him a valuable lesson.

“You should always portray your opponent’s positions comprehensively and in their best light,” he said, “and in fact, your intellectual opponents are your friends, because if you communicate with them, they will help you think better and write better.

“I really do think that the Catholic theological tradition is alive, but to stay alive, it has to be communicated,” he continued. “It has never been stagnant, but sometimes people forget that.”