skip to main content
Return to Fordham University
You are at:Home»Colleges and Schools»Graduate School of Religion and Religious Education»Theologian Details How Catholic Church Might be Reformed Under New Pope

The election of Pope Francis last year represents an opportunity for the church to finally fulfill the goals of Vatican II and become a truly global church, a leading theologian told a group of religious leaders on Friday, March 14. 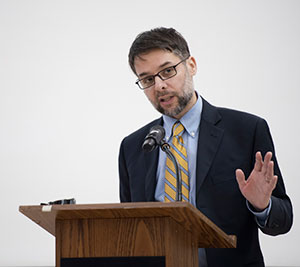 His talk was the keynote address ofFranciscans, Jesuits, and a New Pope: Medieval Lessons for Modern Reform, a two-day conference sponsored by the Graduate School of Religion and Religions Education (GRE) and Paulist Press.

To illustrate how Francis, who was elevated from cardinal and archbishop of Buenos Aires to the papacy on March 13, 2013, has the potential to institute real reform, Faggioli delved into history as far back as 1868, when Pope Pius IX convened the first Vatican Council.

Faggioli (who along with his wife, Sarah Christopher Faggioli, Ph.D., translated the Pope’s first interview with America Magazine) said that Pope Francis represents a new beginning for the church, as he “looks to the rest of the world with different eyes than those of an Italian, Polish, or German pope.”

This is key, he said, because the pontificates of the last 70 years have all been defined in different measures by historical-theological debates related to Vatican councils. From Pius XII’s failure to reconvene Vatican I, to Benedict XVI, who he called the most important theological “reviewer” of the council and its interpretations, the heads of the church have all been consumed by struggles of the different factions within it.

“Since he was ordained a priest in 1969, Pope Francis [halts]this line of popes who were biographically involved in Vatican II,” Faggioli said.

“The Argentine Jesuit Bergoglio perceives the Vatican as a matter that should not be reinterpreted, but implemented.”
During the pontificate of John Paul II, he noted, Vatican II became interpreted through a “political-cultural filter” that was broken down into four trends by Peter Steinfels, former co-director of Fordham’s Center for Religion and Culture, in his book A People Adrift: The Crisis of the Roman Catholic Church in America(New York, 2003).

– A tragic mistake or heresy
-A victim of erroneous and biased interpretations
-A necessary moment of change, reform, and reconciliation between the church and the modern world
-A betrayed revolution

These interpretations lead to the politicization of factions within the church that are consistent with cultures of the Western Hemisphere. Because Francis hails from outside these traditions, Faggioli said he has the potential to effect great change.

“The change of pontificate between Benedict XVI and Pope Francis means a change of paradigm in the way the church frames the idea of reform in connection with the different interpretations of Vatican II,” he said.

“Political-ideological interpretations of Vatican II will linger for sure, but the balance has shifted towards a more theological and less ideological debate.”