skip to main content
Return to Fordham University
You are at:Home»Inside Fordham»Theatre Students Learn From Actor who Brings ‘Lombardi’ to Life

Appearing on Broadway as Vince Lombardi, actor Dan Lauria is said to channel the essence of the Fordham icon and Green Bay Packers head coach.

Even offstage, the Lombardistar looks the part. Sporting a linebacker’s shoulders, wide smile and unwavering confidence, he can conjure the football legend’s gruff persona at a moment’s notice.

Beyond all of this, it turns out that Lauria is a master storyteller. 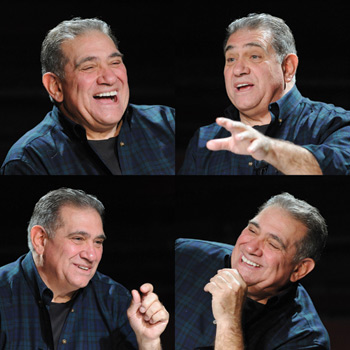 The consummate acting professional shared a score of anecdotes with Fordham theatre students on Dec. 3 at the Lincoln Center campus. The discussion ranged from Lauria’s beginnings as an actor to his onstage rapport with Judith Light, who plays his wife in Lombardi.

A scholarship football player at Southern Connecticut State University, Lauria was approached while in uniform by an acting teacher who needed a “big ugly guy to play Callaban in The Tempest.” He said he jumped at the chance.

“To me, acting was just like playing ball,” he said. “I’ve never had stage fright; I don’t even understand it. I was always anxious and ready to get out there and play.”

His early years in small companies nourished his love of acting and built his network of mentors, collaborators and friends, he said. Lauria, a Vietnam veteran, founded and/or worked in several groups, including: the Veteran’s Company, Boston Commons and the Forum of Italian American Playwrights.

It was in the Veteran’s Company that Lauria collaborated with Veronica Lally Kehoe (FCLC ’02), whose name graces the theatre where he gave his presentation. John P. Kehoe (FCLC ’85, FCRH ’60) established the theatre in his wife’s name and attended the event.

Although his role as Jack Arnold, the intimidating, penny-pinching father on The Wonder Years, boosted his career, Lauria said theatre is the truest place for actors.

“No real actor leaves the stage,” he said. “Lombardi is my 54th play; I tell my agent that if I ever go a year without doing a play—kill me.”

He encouraged young people who want to work in theatre to start their own groups and focus on showcasing them.

“I was never out of a play,” said Lauria, who noted that he also knew how to build theatre light grids. “Groups would ask, ‘Do you want to be in a play?’ and I would say of course, and they would ask if I would also build the light grid. You made yourself needed.”

As a first-time Broadway lead, Lauria expressed optimism about the future of simple storytelling in American theatre despite the emergence of gargantuan productions like Spiderman. The elegance of a play like Lombardi, he said, appealed not just to actors, but to all theatregoers.

“Theatre is where you tell stories. Simple storytelling will come back.”

Noting that Judith Light had recently given him the wrong cue onstage just as a joke, Lauria urged students to enjoy what they do or find another profession.