skip to main content
Return to Fordham University
You are at:Home»Inside Fordham»Theatre Chair Channels Wildness in Acting, Writing and Teaching

Some people say that society requires decorum, responsibility and manners. Others hold that for life to be fully lived, people must occasionally embrace chaos. This is the thin line that Matthew Maguire treads. 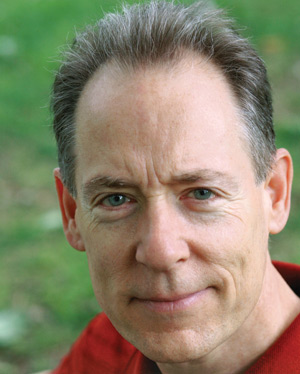 Maguire, a member of Fordham’s theatre program since 1992 and its director since 2006, has used all the arrows in the quiver that is theatre—acting, directing, writing, teaching and producing—to delve into contemporary issues.

Befitting the theme of wildness that runs through his work, he recently finished performing the solo show Wild Man in New York City and Los Angeles. The play received a rave notice from The New York Times, and was satisfying enough that Maguire envisions keeping it alive while he pursues other projects.

“Wild Man asks the question, ‘How can we all get more wild?’ Crossing that line, whether it’s tragic or ecstatic, is crucial to theatre and why people go to the theatre, but it’s also crucial to keeping our souls alive,” Maguire said.

This wildness can be personal, as inWild Man. It also can be about forbidden love, as in his play Phaedra. In Wax Wings, which he wrote on a commission from Emory University, biological and personal wildness come to the fore.

As part of the commission, Maguire attended “Evolution Revolution,” a conference on the science of evolution that was held at Emory in 2008. Of all the attendees, Leslie Real, Ph.D., an Emory biology professor, impressed him the most.

“He had gone to Africa to save the great apes from the Ebola virus. First, he had to track the path of the virus so that the team could find a way to transport the apes beyond that area,” Maguire said. “I thought, ‘This is a great way to live one’s life. This is doing something substantial.’”

The play is about two teams of scientists who are trying to stop a SARS epidemic. It is centered in Alabama and is threatening to go pandemic. The teams feel enormous pressure to ignore time-consuming testing protocols and distribute an antidote.

“You might think, ‘Let’s rush in.’ But if your vaccine is faulty, then you’re only helping the virus get stronger. If you’ve only wiped out 90 percent of it, then the 10 percent that remains will multiply within months and be immune to the vaccine,” Maguire said.

“So my scientists are in a bind, because the pressure on them professionally is exacerbating their personal pressures, and vice versa.”

Wax Wings is scheduled to debut in May. In the meantime, Maguire lent his acting talents to the ABC television show What Would You Do? An episode features him in the role of a homophobic father whose son comes out to him in the middle of a crowded New Jersey diner.

During filming, the diner patrons—who weren’t told they were part of a television shoot—reacted viscerally to what they thought was an actual exchange.

“I wanted to say, ‘Yes, you’re right!’ and yet I needed to stay in character. So that was a truly wild moment,” he said.

Since becoming the program chair, Maguire has combined administrative duties with acting and writing. Like a farmer who can do everything from birth a calf to fix a leaky pipe, he considers everything in theatre to be connected. Teaching makes him a better actor, he said.

“I can’t tell you how humbling it’s been to be in situations, feeling lost as an actor, and to remind myself: ‘Why don’t I do what I teach? Why don’t I make sure what my intention is? Why don’t I deepen my sense of my circumstances? Why don’t I just concentrate on my partner?’” he said.

He continues to pursue his own projects, such as a musical collaboration with composer Daniel Levy called Laughing Pictures, but overseeing the program is a big role. One area where he has made his presence felt is choosing the annual theme that links the four plays the program produces on Fordham’s Main Stage. “Strong Women” is this year’s theme.

“It seemed to me that we didn’t need to put up four plays that were unrelated to each other, when we could get so much more by showing the audience how plays talk to each other,” he said.

As for his own experience, Maguire said writing and acting are equally appealing.

“The Japanese believe that an actor is like a sponge. We become larger than we are because we absorb the energy of the audience. I find that persuasive,” he said. “In writing, you get to imagine an entire world and then it comes alive in front of you, which is a very special joy.”