skip to main content
Return to Fordham University
You are at:Home»Faculty Profiles»Theater Professor Teaches How to See in a Whole New Light

Chad McArver’s job is one consumed by shadows.

As a professor of lighting and set design in the Fordham Theatre Program, McArver teaches students in the program’s design and production track how to see. It’s harder than it sounds. 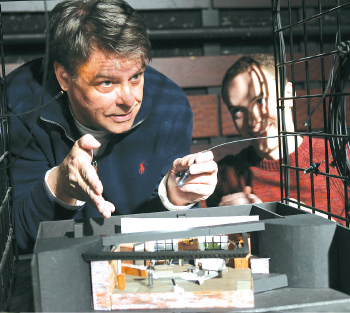 Chad McArver, left, works with students like Daniel Geggart, right, to help them tell stories through sets and lighting.
Photo by Michael Dames
Video: Light and Shadow
Watch the video online at www.fordham.edu/mcarver

“It’s one of those things where, unless the person is actually blind, one assumes one can see everything,” he said.

In fact, McArver, a veteran of the Broadway and Off-Broadway stages and a member of the Fordham faculty since 1999, says that what someone sees is quite malleable and easily swayed. When it comes to colors, for instance, people can only determine the color of an object by comparing it to the contrasting colors that surround it.

Once theatre students understand this, they can make better choices about how to deploy sets and stage lighting that will help the actors tell a story.

One of the first challenges he presents to students is to teach them how to light a stage that’s “dark.”

“Most students will turn all the lights on and put them at 10 percent and make it sort of dim and murky, so you can’t really see anything but you can see everything at the same time,” he said.

“But who really walks into their house where every light in the house is on but they’re all barely glowing? That’s not what dark is,” he said. “Dark is a completely black space with a door open and a crack of full light coming through the space. That contrast tells my brain, ‘That’s a piece of light, and look how dark the rest of this is.’

“That’s how the eye calculates what it sees.”

Like many working in lighting and design, McArver got his start through acting. In high school, he chatted up a member of the crew from a touring theater group who was assembling the lights for a school show. He learned the method of lighting that Stanley McCandless, known as the father of modern lighting design, developed in 1932, which provides full-front light but also sculpts the actor’s features.

“I started doing it for our [high school]shows and kept getting more and more detailed,” said McArver.

In college, McArver realized he enjoyed it more than acting. “One day I was onstage as an actor and I said to myself, ‘My stomach hurts, I’m not happy, and I don’t belong here,’” he said. “So I got offstage—thankfully—and I put all of my energy into lighting.”

McArver mentors students on their projects and works closely with them on his own projects as well. In Not All Thieves Come to Harm You, the second of the Theatre Program’s Mainstage productions this year, McArver designed the lights while Daniel Geggatt, a senior at Fordham College at Lincoln Center, designed the set.

He also works on projects outside of Fordham, such as Minnelli on Minnelli, which ran from December 1999 through January 2000 at the Palace Theatre. In 2005 he lit the grand opening of the Wynn Hotel in Las Vegas, which featured a performance by actor Hugh Jackman. And last year, he traveled to Osaka, Japan, to light Hinton Battle’s American Variety Bang.

This season, McArver is serving as a judge on the nominating committee of the Drama Desk Award. Being a judge requires him to attend so many Broadway, Off-Broadway or Off-Off-Broadway shows that he is at the theater every night throughout June—and sometimes twice on Saturdays and Wednesdays for matinees.

His strongest suit is helping directors use lights to make transitions smoother. In addition to helping students master the technical issues, such as determining how many lights can be plugged into outlets, McArver teaches the subtleties of moving a play from one idea to another.

Recently, when a student ended a play with a slow fade-out of the spotlight on the lead character’s “aha!” moment, McArver convinced him to turn the light off more quickly—to “freeze, and then cut.”

“Then the audience has an interest to explode and come in, clapping.”

Above all, McArver wants students to embrace the sense of wonder that he remembers when he first watched his grandmother combine blue and yellow finger paint to create green—something that can be done with lighting as well.

“I remember thinking, ‘What made that happen? How does this work?’ That kind of curiosity, I think, is what students need to really let loose,” he said. “Don’t try to suppress that. Stay curious.”